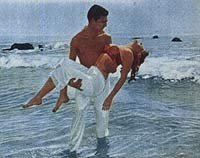 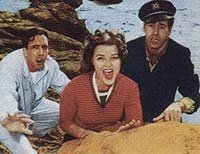 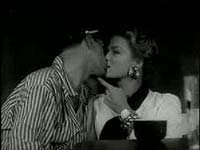 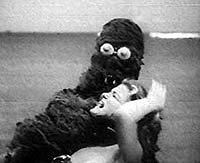 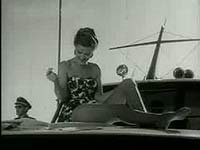 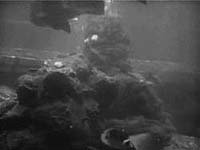 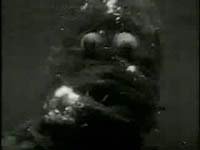 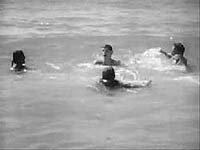 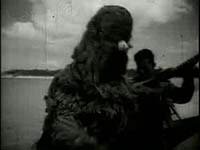 All you have to do is look at stills of this extremely cheaply made science fictionhorror comedy, and you can see the cheap ideas that went into making it. Yet, as bad as it is, it seems to have been the first of many silly looking sea monsters, this one so obvious that it looks like a giant Muppet. In fact something tells me, that when Jim Henson saw this movie he got the idea of creating Cookie Monster.

The plot surrounding the film truly is lame. It has to do with a fake scheme to scare people away by pretending that a sea monster exist in the area, but unbeknownst to the stupid perpetrators of this idiotic plot, there really is a monster, and how he can come out of the water with his coach looking so dry, is one of the most outlandish ideas in these type of films.it's funny that the monster looks more cuddly than scary, even if he is bigger than his victims.the acting, if you can even call it that, is so bad, everybody speaking in mono syllabic terms and acting so childish.

When the people on this boat actually land on an island with primitive huts that do look like something out of Gilligan's Island, complete with coconut trees, you know you are in the Land of the Lost. I know that Roger Corman wasn't going for art with these films only to make a quick buck. There is not a bright idea in the entire film, with the entire cast of adults acting like buffoons throughout, imitating elephants, chickens and big monkeys. the island sequence even has a subplot ripped off from South Pacific that has to be seen to be believed. There is no way even if this was made to be serious that I could take it serious, that everything about it is so silly and juvenile, that I can't believe that any adults that went to see this film at a drive in without a make-out partner could make it throughout the entire film without going to the refreshment stand.

One of the characters seems to be trying to emulate Jerry Lewis, and comes off extremely badly. unfortunately the silly looking monster doesn't even appear all that much and i truly bad generation care of the film down another notch. But there are some good laughs at the expense of the film, and I am certainly glad that I wasn't stuck on this island with the bunch of idiots seemingly castaway here. I prefer to take my chances with Gilligan and the skipper.