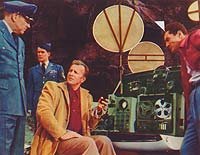 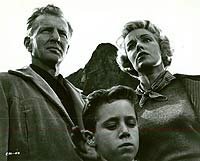 "The Cosmic Man" is worth watching and has a definite message. This low-budget b-movie takes liberally from "The Day the Earth Stood Still", but it has a more specific conflict in it that is its entire focus.

An alien spacecraft lands on earth. It's a sphere suspended above the earth, indicating that these aliens have found out what gravity is and have utilized anti-gravity. Eventually we find out that the cosmic man, seen either in deep shadow in black with no visible form or else in normal form with bizarre glasses, is John Carradine. He's come to see what we human beings are up to because we're starting to venture into space. He's one of many cosmonauts who visit planets.

The movie has mostly talk and only occasional action, such as when an attempt is made to move the sphere, or when a sound wave is bounced off the craft. The main focus from beginning to end is a conflict between the scientist (Bruce Bennett) and the military man (Paul Langton). This starts out as friction but as the movie progresses, and when more military men appear, it becomes a serious commentary on how to address aliens. But it's really a commentary on a basic conflict in American society between peaceful and military views. The peaceful clashes with a military taken up with the idea of threats in a near-paranoid fashion. The film comes down strongly on the side of the peaceful approach, especially when John Carradine makes a long speech, which is followed by the military men shooting at the shadows in an attempt to capture this being. Even a sub-plot that revolves around a crippled boy brings out the same theme of a military whose focus is blinding them to a broader set of possibilities and even realities. After all, any civilization with an anti-gravity device can neutralize humanity if it wants to.

I am sure that some will see the script as a product of its times, and it is. Yet it's not at all out of date in 2013, and that's what makes this film interesting today, not to mention that it addresses the issues intelligently, even if the dramatic action is on the subdued side.