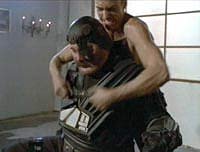 This film was featured on the cult television show, Mystery Science Theater 3000. It is also very bad and I have to say that it is almost too bad. A film that seems to try and combine the Terminator series with Jurassic Park it fails doing either in any good way. Once again, it just seems too bad. More like one of those awful Terminator ripoffs combined with the Carnosaur dinosaur puppets...yes, they are the same dinosaurs used in that cheesy film, but that film was still better than this one! There is just too much bad going on in this one! Wounds that appear, disappear and reappear! Cyborgs that start out having white faces, but that is seemingly ditched mid-scene! A credit in the opening sequence that notes a special appearance by someone most people who have watched thousands of films most likely never heard of! It just screams suck at every turn! I would normally try to find some merits, but I cannot as this film seems to have been made purposely bad! The film Werewolf was bad, but it seemed like they were at least trying in that one and even had a recognizable star or two. Here we have Robert Z'Dar who has his moments, but here you barely recognize him except for his large face!

The story has a spaceship flying through space and a smaller ship flies to earth. On it is a man who must flee a dinosaur and then fights a cyborg and then gets hit by a cussing nun! Soon she becomes entangled in his problems as dinosaurs start eating the local citizens and cyborgs are chasing after the guy she hit! She turns to her gang of plaid wearing gang members and they take one final stand against the dinosaurs in the driest sewers ever, complete with wooded ceilings and ladders! Will she become a nun? Will our hero become a counselor? And will the film ever explain why it is easier to kill dinosaurs and cyborgs with knives, poles and nets than it is guns?

This movie made for a really good episode of Mystery Science Theater 3000. Too good. I almost think after watching it multiple times that it was purposely made bad in the hopes of being riffed by the show. There is just too much to joke about going on, even Manos did not have as many slow pitched softballs as this film for the gang on the satellite of love to hit out of the park. There are so many they could not even make fun of it all! The film was made in 1994 so MST3K was well known then and probably at its height. So I just can see makers purposely making a horrid film in the hopes it would be riffed because my guess is that the movies that are riffed get an up tick in sales. I don't know if I am correct, but the movie just seems to horrible and to easy to riff.

So there you go, I just think at no point did anyone think they were making anything but a very bad movie. Which is why I could not give this thing more than a one. The nun sub story was abysmal and she was not attractive, the gore was limited and what could be Jean Claude Van Damme's stunt double is annoying. The fight at the end was idiotic and there is just not a whole lot of good one could find here. I guess it was nice they found some more uses for those Carnosaur dinosaurs.