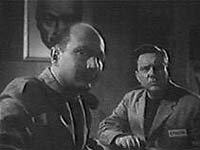 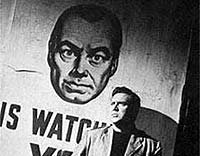 In a recent review of Terry Gilliam's 'Brazil,' I confidently referred to the film as a "weird, twisted, fantastical tale of the sheer absurdity of an Orwellian society." In all honesty, at that time, I wasn't even certain of what constituted an "Orwellian" society, since I had never read the novel, and was only repeating fragments which I had extracted from other sources. Not more than three weeks ago, I decided to finally get my hands on George Orwell's famous dystopian story to see what it was all about, and was somewhat surprised to discover that it was one of the most engaging pieces of literature I had ever read. Eager to find out how the film adaptations treated Orwell's themes, I immediately tracked down copies of Michael Radford's timely version (released in 1984), as well as Michael Anderson's harder-to-find '1984,' released in 1956.

Michael Anderson's '1984' was not, in fact, the first adaptation of George Orwell's novel, following a 1954 BBC television Sunday Night Theatre broadcast, which I've heard is phenomenal. I had expected that a 1950s adaptation would sugarcoat some of the novel's darker and more pessimistic themes, and yet I was pleasantly surprised to find that screenwriters Ralph Gilbert Bettison and William Templeton have followed Orwell's story quite closely. Edmond O'Brien plays Winston Smith, a lowly member of the Outer Party at the Ministry of Truth, where he works every day at "revising" history to correspond with Big Brother's most recent declarations. Winston secretly harbours a resentment towards Big Brother and his totalitarian government, a crime that is punishable by death should he be observed by the all-powerful Thought Police. However, Winston is not alone, and he soon discovers that the beautiful young Julia (Jan Sterling) also shares his reservations, and the two strike up a romantic relationship, meeting in locations without surveillance and always toying with the risk of capture.

Inevitably, both are arrested by the dictatorial government, and Winston falls into the hands of Gen. O'Connor (changed from O'Brien in the novel, possibly to avoid the name clash with the film's main star), played by Michael Redgrave. Slowly but surely, O'Connor sets about destroying Winston's will, persisting with his torturous punishment, not only until Winston obeys Big Brother, but until he loves him. An alternative ending reportedly had Winston and Julia screaming "Down with Big Brother" as they fell before the firing squad, a conclusion that I suspect would have infuriated George Orwell. Fortunately, the version I saw stayed much truer to the spirit of the novel, ending with a "rehabilitated" Winston proclaiming his genuine love for the almighty leader. There is also a brief, ten-second epilogue in which the narrator practically spells out the film's moral  as if it wasn't clear enough already  but this minor slip-up is easily forgiven.

The performances in the film are very well done. Edmond O'Brien does not look how I had originally pictured Winston Smith  perhaps a bit plumper than expected  but he did an excellent job, most impressive in the scenes of his torture. There is one brilliant long-take in which we see O'Connor pacing back and forth across the screen, periodically holding up four fingers and trying to convince Winston that there are five. Winston, pictured on a television monitor behind O'Connor, vigilantly maintains that "two and two equals four," before the latter's persistent torture finally breaks him. The acting here from both parties is sublime, and we can really feel the agony that poor Winston is enduring. Also notable is actor Donald Pleasence, who plays R. Parsons, an average workman who is hopelessly devoted to the Party and its leader, even after he is arrested for alleged thought-crimes.

Perhaps one of the few complaints that I can make about the film is how Room 101 was dealt with. Though I was most impressed with O'Brien's acting during this sequence, it was all over much too quickly to be effective, and we don't even see a thing, treated only to the frantic squeaks of a mass of hungry rodents. Whilst it is often true that the less the audience sees the better, here didn't seem to be one of those moments, and the whole scene would have worked much better, in my view, had we been subjected to what Winston could see; to be face-to-face with "the worst thing in the world." Other than this, I can certainly recommend '1984' for its fine treatment of a challenging piece of dystopian literature.

Review by ackstasis from the Internet Movie Database.