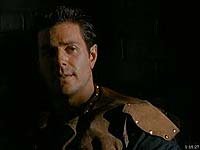 I have seen this movie twice now and it's like watching two different movies. The first time I saw this title it was merely a strip show. People got naked, began to touch and fade to next scene. Sure, they were very attractive people but there was almost no sex and the little that was shown was brief and unexciting. Which I thought was a shame since the girls were nearly all beautiful and buxom and there was a nice variety.

The second time around made up for my initial disappointment. The sex scenes, it turns out, had been cut from my first viewing. The second time there was plenty of very hot sex with a good variety of positions and views and the effect was good enough to let you overlook the fact that it was all simulated (or was it? It was that well done.)

If you are a soft-porn fan, put this one on the list. The women are excellent, the action is frequent and the plot is silly enough to be amusing and entertaining.

Review by champione from the Internet Movie Database.