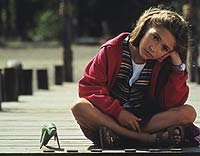 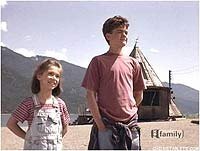 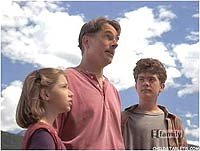 MAGIC IN THE WATER is par for the course for an American kid's fantasy film. It features a couple of bratty children and their humble father who become involved with a mysterious lake said to be inhabited by an ancient creature. The usual gamut of stereotyped characters are involved, from the Native American shaman to the eager-to-please Japanese folk and the by rote human villains.

This is neither the best nor the worst of its type, merely a humdrum outing designed for kids and kids alone. The stylistic similarities to FREE WILLY are more than obvious, but the central creation is kept off screen for the most part so it all becomes a little dull. The special effects are pretty good for the most part, though. The less-than-stellar cast includes Mark Harmon (TUAREG: THE DESERT WARRIOR) and future star Joshua Jackson (of DAWSON'S CREEK fame).