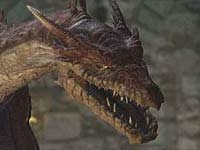 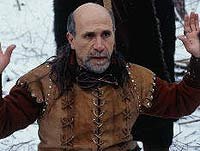 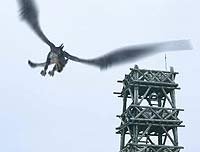 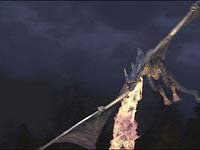 Dragon Storm starts in outer space as various meteorites hurtle towards Earth, cut to 'Carpathia 1190 A.D.' as these meteorites land they hatch & large fire-breathing Dragons emerge. A messenger (Vlado Nikolov) informs King Fastrad (John Rhys-Davies) whose Castle is attacked by the Dragons & his people slaughtered, King Fastrad escapes with Theldag (Tony Amendola) his bodyguard who hire a huntsman named Silas (Maxwell Caulfield) to take them to the Castle of King Wednesbury (John Hansson) for protection. Once there Fastrad tells Wednesbury about the Dragon threat that threatens to wipe out his kingdom. King Wednesbury orders his mage Remmegar (Richard Wharton) & Silas to set up a team of Dragonslayers to seek out & destroy the alien Dragons...

Directed by Stephen Furst there is little in Dragon Storm to recommend. The script by Patrick Phillips & Sam Wells is basic, sloppily paced & plotted & commits the unforgivable crime of all but neglecting the Dragons in favour of annoying comedy relief character's & an uninteresting sub-plot about overthrowing King Wednesbury. It's rather predictable & is less than exciting to watch. I would have liked to have seen the Dragons eat some people, one Dragon bites someone's head off at the end but that's it, they just use they're fire breath to wreck havoc which becomes boring very quickly. Also what's with the bizarre notion that Dragons come from outer space?!

Director Furst ruins anything the film might have had going for it, the action scenes are so lacklustre & unexciting it's hard to believe anyone could have made such a mess of it. The character's just stand there looking very uncomfortable, almost as if their not sure as what their meant to be doing. The fights & Dragon battles are tedious in the extreme & these Dragons sure do die easily & don't even seem to put up much of a fight.

Dragon Strom was made-for-TV, it was shot in Sofia, Bulgaria & had a budget of about $1,000,000. The whole thing has a cheap look about it although most of the CGI Dragon effects are actually pretty impressive which is a bit of a surprise, it's just a shame they aren't used to any great effect & the rest of the film is poor. The locations are obviously derelict run down tourist attractions. The acting is average at best.

Dragon Storm isn't very good, it's cheap & doesn't provide much in the way of entertainment. Both Dragonheart (1996) & Reign of Fire (2002), big Budget Hollywood Dragon themed films, are far superior to Dragon Storm in every way. Worth a watch if you can catch it on TV for free & nothing else is on but it's not worth going out of your way or spending good money to secure a copy.