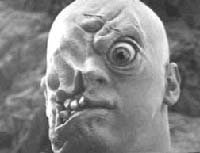 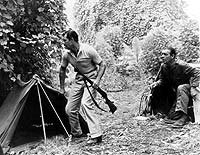 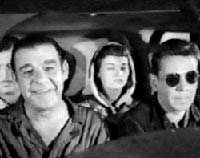 This was director Bert I. Gordon's third movie in what would become a long line of (50's) classic sci-figiant creature movies. Almost any movie Gordon directed could easily fall into a top ten of 50's schlock B-movie sci-fi epics. Epics such as 'King Dinosaur', 'Earth vs. The Spider', 'Attack of the Puppet People', and 60's legend 'The Magic Sword'.

But like some of Gordon's other movies (and many other movies of the time) the basic story here is all too familiar. Essentially a team of experts travel to a remote part of the world only to discover giant creatures living there, and that's it. And yes once again the reason for these giant abnormalities is a dose of good old-fashioned 50's radiation. The only real differences here from other similar themed movies are, the team of experts is searching for a missing person and the remote location is in Mexico; not the usual distant undiscovered island. Alas everything else we see here is by the books and highly formulaic.

The lead scientist Russ Bradford (James Craig) is a well built, well rounded, good looking chap with a stylish Flynn-esque moustache. The second expert Marty Melville (Lon Chaney Jr.) is the more trigger happy unpredictable character who gets upset and flustered quickly putting the others at risk. Pilot Lee Brand (Tom Drake) is the in-between character so to speak, he is sensible and well rounded but also easily led astray. And naturally you can't have a movie like this without an attractive female character to put in peril and so you have Susan Winter (Gloria Talbot), the woman who has organised the search and rescue mission.

The giant creatures discovered are all regular creatures such as lizards, birds, bugs, and some small mammals. All of which consisted of the usual stock footage which had been crudely projected against live action footage of the actors. Twas the standard effect for movies like this at the time but here it looks especially poor, mainly down to a lack of budget and time restrictions. What's amusing is the fact that the animal footage is clearly completely different location wise to the live action location footage with the actors. In some scenes the actors were obviously in some botanical garden area somewhere (in Hollywood probably) whilst in others its clearly a set.

On top of that the actors really don't seem to be reacting to the giant threats all that much. Clearly they had no real idea how to react and where to look, plus their lack of amazement at the discovery of giant creatures is somewhat of an eyeopener frankly. Most people would be understandably shocked and amazed by finding giant animals alive and well roaming around Mexico. Not these experts, it's just an inconvenience for them. Also, did they actually show footage of a small rodent actually being killed by a bird of prey??

The location for all these giant radioactive animals also raised some questions. Supposedly these creatures dwell in the jungles of Mexico, but initially the search and rescue mission was clearly flying over a mountainous desert region of Mexico. And when the team land they are still in a mountainous desert region. Now I'm no expert on Mexico but the northern part is more desert and the southern part is more green I believe, so where exactly where the team supposed to be? And not one person had ever reported these giant creatures? Not even the giant human cyclops?

Ah yes the giant human cyclops, the titular character. Now this character turns out to be the missing person but, like the animals, has mutated due to the radioactivity in the area. Not sure why he has become a disfigured one-eyed mutant seeing as all the other creatures just got bigger but whatever. Also not sure why this person didn't manage to leave the region in search of help before he mutated into a cyclops but again whatever. The makeup for this giant mutant was actually well done (for the time) and pretty disturbing. His huge bulging non-blinking eye, bald head, and nasty disfigured mouth with protruding teeth were probably quite terrifying for folks back in the 50's. Sure he does literally nothing other than lurch around and growl (why is he unable to talk?) but kudos on that makeup job.

In the end it's actually pretty typical and amusing that the team of experts manages to find this missing guy...but end up killing him. Yup, they go through all that and just end up blinding him before killing him...somehow. Before the credits role we see the cyclops lying dead (in a horrendous projection shot) but I'm not really sure how. They don't try to help this guy, they don't seem to care about the giant animals, and they don't seem overly bothered about the large deposits of radium in the area that caused all this. They just kill the cyclops and fly away to safety in a happy ending. Maybe they looked further into these things when they got back to the good old US of A.

So in the end I can't really recommend this Gordon directed feature I'm afraid. I wasn't expecting anything groundbreaking here, I knew exactly what I was gonna get, but it's just not on the same level of enjoyment as other similar themed movies. Dare I say its actually just a poor movie? Everything about this was just badly done, seemingly lacking any sort of real passion. Not even Chaney's stupidly rash character could elevate this much. I found myself somewhat bored to be honest although I do appreciate how this early project was a building block for Gordon and later (better) features.

Review by phubbs from the Internet Movie Database.