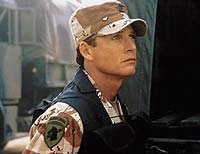 This low-budget movie has a lot going for it in regards to sci fi integrity and even action-thriller consistency. While the character, role stereotypes are persistent in this movie, their use is smoothly and logically calculated, there is expected emotional tension, but there is also a careful continuity in roles and performances that exceed most low-budget movies. The style, the visual impressions, and the military standards (i.e., looking out for the side guys, etc.) maintain a standard that makes this movie more serious, authentic in its employment of entertainment. The script takes old ideas and transforms them in substantial new ways to make this movie more interesting than past renditions of this material. The movie takes itself serious in a manner that it reflects on the quality of the presentation. The an ironic way, there is simplicity in some of the dialogue (that could easily be taken as corny and yet in the context of how the movie itself plays out, makes the impact of the dialogue, oddly acceptable and understandable lending itself to the credibility of the film, perhaps it's the sincere effort that can win over those experiencing the movie. However, this movie was overtaken by the arrival of Denis Villenueve's Arrival (2016).

The logic in this movie is a finely crafted thoughtful piece, unlike even ALIENS (1986), where the marine combat unit is similarly outfitted, but there are the typical irrational and overly dramatic collapse of command. EPOCH attempts to maintain humanistic efforts at reasonable behavior under what is of course alien conditions. Having the EPOCH military unit hold its position and careful assessment of conditions.

The sci fi visuals of energy fluxes are even more captivating and elusively elegant than the similar mechanical versions of THE MATRIX (1999). The evolution of the script, admittedly takes the convenient stereotypes of military action and peaceful co-existence and is able to move the plot into a higher level of experience making this movie a better effort than most B-movies of its kind and can rival even those of the higher budgeted, quality movies of its kind.

A parallel to EPOCH might be seen in the Kurt Maetzig's FIRST SPACESHIP ON VENUS (1962) for its consistent efforts with limited funds to produce an intelligent script along with some fascinating visual effects. Additionally, EPOCH operates on a number of different levels, individual and regional, and international levels simultaneously - balancing the direct personal investigatory efforts, the regional military situation and also the higher governmental command level, all accomplished with relative competency.

Underlying this entire production effort is a humanistic premise behind this movie that resonates with other sci fi efforts such as WAVELENGTH (1982) and to a lesser extant CLOSE ENCOUNTERS OF THE THIRD KIND (1977), THE DAY THE EARTH STOOD STILL (1951), and even STAR TREK: THE MOTION PICTURE (1979) in both the visuals and the underlying theme of humanity and evolution and perhaps an E.T. (1982) for grown-ups. EPOCH even captures a bit of THX-1138 (1971) in its visual design in several scenes of a white vastness and MISSION TO MARS (2000) and its climatic vision of the planets scenes but with an even more layered sophistication unlike the clarity found in BRAINSTORM 1983) and finally there are bits of FAILSAFE (1964) in the nuclear crisis and diplomatic frenzy that in a illustrative way place the United States on an uncomfortable portrayal. It is perhaps because of this humanistic premise the larger than life, extravaganza of such sci fi blockbusters sci fi action thrillers such as INDEPENDENCE DAY (1996) or even THE MEN IN BLACK (1997) can't be achieved. One of the exceptions to this would be AVATAR (2009) which could be thought of as the overly expensive 3-D special effects sci fi movie of the decade and DISTRICT 9 (2009) which was able to tap into the more terrestrial association with a humanly ethnic discrimination theme.

In a rather perplexing juxtaposition, the visuals near the end are somewhat suggestive of the magnitude attempted in FORBIDDEN PLANET (1956) but with not as sharp and genuine in the context of the time that movie was made, but yet sufficiently effective to allow for the benefit of the doubt of its authenticity to maintain the acceptance of the scene. Overall, EPOCH is an accomplishment on a small budget with a smart script and exciting visuals worth a look for those interested in less than action and more on the cerebral basis of sci fi with a form of humanity.

Review by tabuno from the Internet Movie Database.