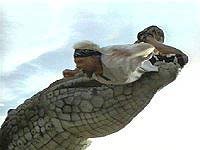 A television producer, a camera chick & two surfers head to a distant island in the Philippines in order to make a documentary about "blood surfing", an extreme sport where the surfers throw blood into the water then surf in the midst of sharks. But after a good day's surfing, the group discover that something has destroyed their boat. They are then pursued by a monster saltwater crocodile that kills for fun & that is after them in a big way. Along with a group of pirates who patrol the island & a sea captain who is itching for a way to get revenge on the croc for ruining his life, the crew must find a way to escape the island & the croc's teeth.

I really love killer crocodile films – my love for this under-appreciated subgenre stems from watching my late father's VHS copy of the Italian flick Killer Crocodile during my youth. That film was awesome to my nine-year-old eyes & even today it still gets me going. Ever since then, I've seen a number of similar films.

Blood Surf is one of the millennium's first ever monster crocodile films – made in 2000 to be exact – and I first saw it on late night television. At the time, I thought it was pretty silly given the lack of a good script & some pretty mediocre visual effects (the crocodile looked pretty fake). Years later, I obtained a VHS copy of Blood Surf & decided to review it. Was my initial assessment of the film accurate? Well, yes & no.

Blood Surf is a horror film for surfers. The heroes of the piece are a pair of dumb white-bread surfer dudes (& the top-ranking female is an Aussie camera chick), one of whom has an unhealthy love for his surfboard; the premise involves an extreme form of surfing – not content with killer waves, they hit upon the idea of surfing in shark-infested waters – and the film is filled with all manner of surfing dialogue & terminology. The film even goes so far as to acknowledge its inspiration – "What's the name of that killer shark movie?" one surfer asks; "Jaws". "There's no mechanical fish on this island." The film, in an attempt to reach out to the jaded teenage market, has a sex scene where one of the surfers has sex with who is later revealed to be an underage local girl (the scenes being intercut with the death of the girl's parents makes this a real mess of a scene). I wonder if anyone out there might be interested in actually making a real attempt at actually "blood surfing" (it would be a pretty wild ride, despite being an insane idea). This film's first act is quite good.

But once the crocodile begins attacking, Blood Surf quickly falls into the tired Jaws templater that it was billed as. The visual effects are pretty poor – once the croc appears, you will know why they kept it hidden. The creature is simply a large animatronic croc that looks pretty badly designed (the crocodiles in the Killer Crocodile films looked much more convincing & those two films had a much lower budget than this one) & which is 'supplanted' by miniatures, bad CGI & stock footage. The inclusion of pirates into the film is a poor attempt at causing complications in the story & some of the croc attacks are so fake-looking that they will incite laughter in the audience.

On the acting front, the cast do a reasonable effort at filling their roles but you'll still realise that their roles are nothing more than cardboard clichés. Most notable is the film's version of Quint – Duncan Regehr's character of John Dirks – who even dies the same way (getting bitten in half). Katie Fischer seems to be overdoing her native Aussie accent in an attempt to pander to the Americans in order to bring back memories of the Crocodile Dundee films. Director James D. R. Hickox, who is the brother of genre director Anthony Hickox (who made the likes of HELLRAISER III: HELL ON EARTH & the Steven Seagal actioner SUBMERGED) gets a fair amount of mileage out of the surroundings & the underwater shots but doesn't seem to be as good a director as his brother (who himself is only a passable director at best), making piecemeal out of what should have been a reasonable monster flick. Still, it's not a total loss & the story will make many Jaws fans laugh their heads off.