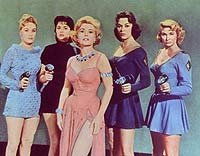 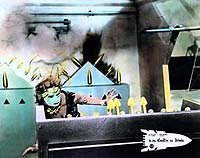 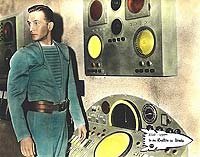 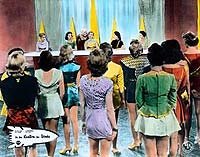 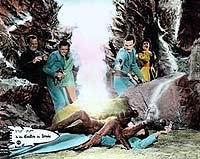 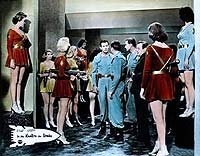 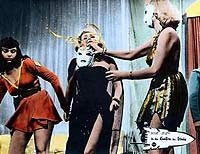 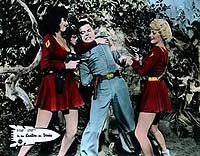 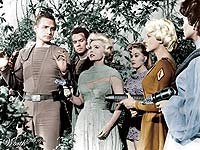 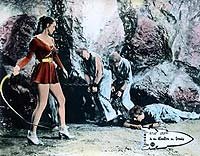 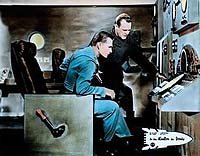 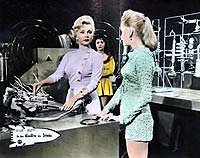 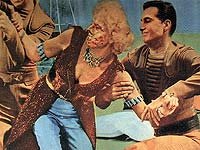 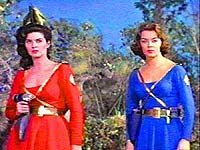 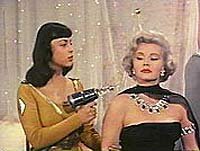 Well for me, I guess this is what you'd call a bonus day on Turner Classics - as they screened "The Cosmic Monsters" followed in quick succession by "Queen of Outer Space", neither of which I'd seen before, thus gluing me to the TV for a span of three hours. As 'Queen' progressed, it became pretty apparent to me that the story was an updated version of 1953's "Abbott and Costello Go to Mars" for a host of reasons. For starters, even though the name of the A&C romp has 'Mars' in the title, they actually wound up on Venus by way of New Orleans and the Mardi Gras. In both stories, the planet is ruled by women who have spurned men and banished them from their world. It would probably be a toss up between Zsa Zsa Gabor and Mari Blanchard as to who was the more beautiful co-star, but overall, I'd have to score one for A&C for having the better looking array of female Venusians. Theirs looked like they walked off the set of a Miss Universe contest, while the gals here were definitely cast for their gams and not their faces.

One of things that really blew my mind here was seeing Eric Fleming in the picture as Captain Neal Patterson of the astronaut team. It's hard to imagine how coming off of this flick he would have been tapped to ramrod herds of cattle across the West in 'Rawhide'. In fact, I can't imagine how any of the principals managed to do this with a straight face. The sets are incredibly cheap looking, the Venusian backdrop is totally art deco, and the dialog is interchangeable with any Frankie and Annette beach flick from the following decade.

You could probably put together a pretty long list of the incredibly goofy stuff going on here. As far as I could tell, the story takes place in the way distant future of 1979, since it was mentioned the American way station in outer space was built twenty two years ago in 1957. Since the picture came out in 1958, I was literally astounded to see the Queen's flat screen TV operated at one point by the Captain with a remote! My question - how come it took so long for us to get them?!

Now if you're watching the picture with a critical eye, not something I'd recommend mind you but nevertheless, you'll marvel at the incredible coincidence of the hijacked astronauts landing on a planet where they don't need pressurized suits or an oxygen supply. What a lucky break! Then there's the whole business of Queen Yllana (Laurie Mitchell) looking to blow up Earth with that Beta-Disintegrator gizmo. When she finally got around to it, she kept punching that red button like one does on an elevator that fails to respond the first ten times. With all that, we never got to find out why the thing malfunctioned turning her into a crispy critter.

You know, if you think about it, there's a natural progression in film making when you start connecting the dots here. You had that 1953 Abbott and Costello film, and then you had this one serving as a connecting bridge to that landmark of television Sci-fi - 'Star Trek'. The female crew members of the Enterprise got by on pretty much the same colorful mini-skirts that the women on Venus did, and Captain Kirk was just a more sophisticated version of Lieutenant Larry Turner (Patrick Waltz). With that in mind, I'd have to agree with Professor Konrad (Paul Birch), who at one point in the proceedings opined - "It appears all things are possible in space.".