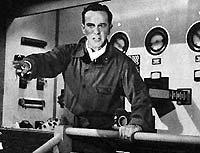 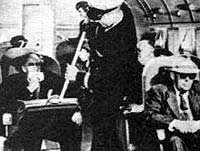 A routine but kind of amusing entry in the science-fiction series of the early 1950s. I missed the first half hour or so, so I'm filling it in from sequelae of the early events.

Some ancient experimental physicist invents a new element with lethal powers. Like the man-eating plant in "The Little Shop of Horrors," it must be fed a certain amount of energy on a regular schedule, or it turns magnetic, attracts every metal in sight, and destroys life. So far, so good. Only the thing, which started off as hardly more than a pinpoint of matter, gets bigger with every meal. Soon it will be so big and so dense, it will throw the earth out of orbit and you know what happens next.

And, man, this element is heavy. The movie is loaded with all kinds of scientific jargon. Most of it got by me. But I did catch the fact that the molecular weight of this thing is somewhere above one thousand. This brought me to instant alert, Darwinian points quivering. A cloud of half-remembered concepts drifted back into my ken from high school -- molar mass, molecular weight, Avogadro's number, isotopes -- but somewhere along the way they'd lost much of their semantic luggage. I think I can feel a molar mass right now with the tip of my tongue. It's right back there, see? It's been bothering me for a week, doctor.

Anyway, I get the impression that this thing is pretty "heavy". There is also a suggestion that when the original physicist discovered this element, he pulled off a kind of slow-motion replica of the Big Bang, the instant when the universe was created out of nothing. The result of the Big Bang was a couple of "forces" like gravity and a horde of hydrogen atoms. That's okay, as far as it goes. But if the universe is everything that now exists, and if it's expanding, what the hell is it expanding INTO? Well, never mind that. The attempt to stop this thing from growing becomes frantic, along the lines of "The Andromeda Strain." The only way to stop it is to bombard it with more electrical energy than it can possibly absorb, so it chokes to death. The computer arrives at a minimum of 900,000,000 volts, which is an awful high figure. I mean, your brain only generates a measurable 10 microvolts. Well, that's about the average; I can't speak for any particular brain.

The US has no such generator but Canada does, buried beneath the ocean depths in Nova Scotia. Canada reluctantly agrees to its use. The underground control room is about the size of a large living room and is filled with curious knobs, buttons, levers, and winches. Richard Carlson and his buddy, King Donovan, place the entirety of the dangerous mass in the death chamber and begin activating the Super Duper Generator. Does the plan work? Well, we're still here, aren't we?

Review by rmax304823 from the Internet Movie Database.