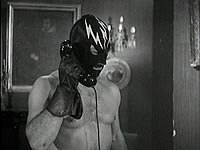 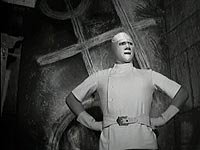 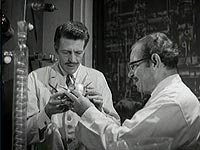 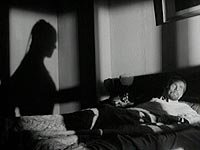 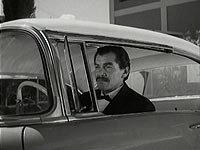 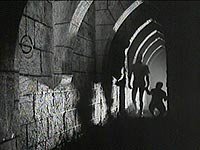 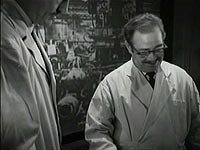 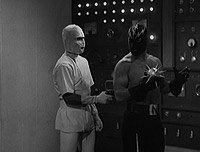 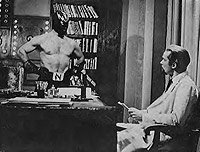 The plot of Neutron-'the Man in the Black Mask revolves around a doomsday weapon in the shape of a small spiked ball, which is confusingly called "the neutron bomb" despite the fact that it bears absolutely no resemblance to the real neutron bomb designed by Edward Teller. In this storyline, the bomb is a peculiar gas-emitting weapon created by a brilliant Mexican physicist named Professor Norton. The professor is presented as a humanitarian whose only motivation for creating "the most destructive bomb in history" is the achievement of world peace. "This little bomb is so powerful that no one would dare start a war now," muses the delusional Norton to his skeptical assistant. But no sooner does Norton utter those words than the assistant---a "mediocre" scientist named Walker---murders the professor and steals the bomb formula. One might think that a crime of this potentially genocidal magnitude would attract the attention of federal authorities, but the case is handled by a single, rather ineffective local police inspector named Lansing.

When Walker proceeds to join forces with the real villain of the story---the megalomaniacal Dr. Caronte---the pace begins to step up. Caronte is a would-be conqueror who plans to take over the world with an army of obedient, bulletproof zombies. He is convinced that the only obstacle to his success is the existence of the "neutron bomb," and he rants incessantly about possessing the secret of the bomb's destructive power. Walker shares his stolen data with Caronte, but it turns out that Professor Norton only possessed part of the formula. The rest of the bomb plans were divided between three other scientists in the interest of national security. And so, predictably, the remainder of the movie consists mostly of Neutron failing to prevent Caronte's zombies from assassinating the other scientists and stealing their parts of the bomb formula. Incredibly, the zombies, despite their rather inconspicuous appearance and ponderous gait, are able to murder the scientists, collect the entire formula, and kidnap Nora without being detected. With the complete plans, Walker succeeds in constructing a "neutron bomb" for Dr. Caronte, and all seems lost.

But Neutron has a plan. He recruits a British physicist named Thomas---a man described as the only living scientist who understands the bomb's technology---to publicly pretend to be able to counteract the bomb. Professor Thomas (a man of apparently limitless courage and trust) then allows himself to be kidnapped by the zombies(!) and brought before Caronte and Walker. Neutron, however, has secretly trailed the zombies back to Caronte's hidden laboratory. Just as Walker is ready to shoot Professor Thomas and Nora, Caronte intervenes. "I have something better in store for them!" he says, as a wall panel rises to reveal his army of zombies. At that moment, Neutron leaps into action against Dr. Caronte and proceeds to fight the zombie army to a standstill. During the ensuing melee, a mindless zombie mistakenly murders Walker, and Dr. Caronte and all of his zombies are disintegrated by Caronte's own bomb.

One would be hard-pressed to imagine either Neutron or Caronte existing outside of the film's surrealistic universe, but the other characters in the film react to the two masked men as if wearing a costume in public was nothing unusual.

Neutron is unusual even by superhero standards, however. He bears no resemblance to friendly archetypal characters such as Superman or Captain Marvel. As is perhaps fitting for a Mexican superhero, Neutron dresses in the manner of a lucha libre wrestler. His all-black costume comprises tights, leather gloves and wrestling boots, a belt with a big 'N' on the buckle, and a full-face wrestling mask with three white lightning bolts on the forehead. One thing his costume is lacking, however, is a shirt. While it is not unusual to see a shirtless wrestler in the ring, it is somehow disquieting to see this muscular, half-naked man in a mask sneaking around in the dark and creeping into people's houses. In any case, Neutron is a man with complete confidence in his deodorant. Incidentally, no explanation is ever given why the hero bears the same name as the bomb.

In contrast, Dr. Caronte is garbed entirely in white. His costume comprises a short sleeve tunic, tights and boots, a full-face wrestling mask, and rubber dishwashing gloves. Caronte's costume effectively identifies him as the doctorwrestler he is, but one would think that he would make his dwarf assistant, Nick, wash the dishes. Perhaps the zombie chemicals give him dishpan hands when he doesn't wear the gloves. Perhaps he just does things the way he was trained at undead medical school.

The entire film is silly, but the dialogue in some of the scenes is particularly ridiculous. When Walker first meets Dr. Caronte, the former praises the latter for being logical. The doctor takes offense and chastises Walker. "I detest that word...Do you see any logic in all this? Do you think my creatures are logical?" challenges Caronte. "I've done the impossible!" James, Charles, and Martin seem to find themselves at the nightclub every evening. On more than one occasion, the nightclub setting provides an opportunity for the director to insert an incongruous musical number, which completely disrupts the flow of the action.

Special effects are practically nonexistent. They consist of the smoke emitted from the "neutron bomb" and a few bizarre sound effects. The bomb itself looks as if someone attached long spikes to a baseball and spray-painted it silver. The zombies are nothing more than tall actors wearing lumpy, faceless masks and messy black wigs. Strangely, all of the zombies are dressed in automotive repair jumpsuits. Considering the number of zombies under Caronte's command, I would guess he was probably able to buy the jumpsuits wholesale. After the last zombie has been dissolved and Dr. Caronte is no more, the final result of all of this absurdity is a truly terrible film that paradoxically succeeds in entertaining the viewer despite itself.

Review by clemente_luca from United States from the Internet Movie Database.