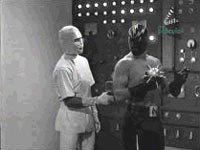 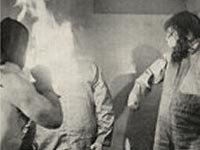 All right, I realize this is some kind of spin-off to a Mexican wrestler movie, so you can't ask for too much. And a lot of the problems with the movie are created by an English dub that is so sloppy and negligent as to defy belief, (I know...I can imagine the production crew thinking, "What the hell, it's only a Mexican Wrestler movie, who cares if the dubbing's any good?")

In its favor: the hero, "Neutron", is fairly well built and is reasonably adept at leaping around and doing fight choreography while keeping his gut sucked in. There are a fair number of fights, a fair amount of camera movement, and a potentially exciting plot idea about a returning supervillian blowing up the city with a "neutronbomb" and using evil "death robots" to fetch his supplies from various warehouses and murder random people and drain their blood to keep three brains alive. And there's a scene where a "death robot" pulls its own head off to avoid giving away the location of its lair.

And it is kind of sweet when the supervillian and his dwarf assistant hold hands as they walk from location to location inside his lair.

Against? A terrible dub where the dubbers appear to be reading their lines off cue cards for the first time while recording. "Death robots" that appear to actually be mummies of sorts, reminiscent of the Aztec mummy from the infamous "Robot vs the Aztec Mummy anti-classic from the same period. An absolute lack of apparent superpowers displayed by Neutron, except for the introductory scene where he jumps into the air and disappears (flight? teleportation? invisibility?) but that ability is never shown again. A lot of wasted time watching the movie's romantic interest warble Mexican love songs (and at one point, for no reason that I can see, a Marimba band doing the same thing). A stunningly unconvincing "love quadrangle" and a desultory running subplot about discovering Neutron's "secret identity" (even though it is established early on that Neutron's effectiveness depends on his having a secret identity.) A HUGE amount of screen time wasted watching people walk up and down various staircases.

And finally, plot holes you could drive a bus through, including the fact that the pit full of "death robots" disappears from the pit near the end of the film and it is never established where they went or what happened to them.

Still, the movie is harmless enough. But I'd rather watch "El Santo Versus the Vampire Women" again.