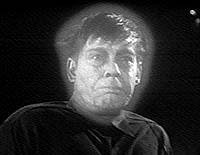 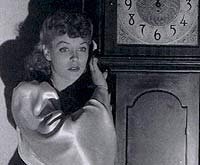 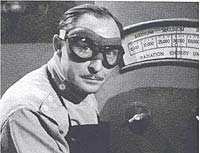 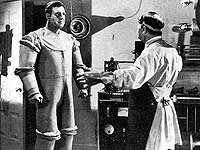 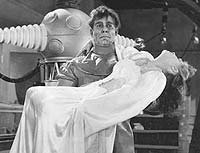 Before they made THE WOLF MAN together, director George Waggner and star Lon Chaney Jr made this Universal "monster movie". Chaney's Dynamo Dan, the Electrical Man was a sideshow charlatan whose specialty for the crowds was acts involving electricity. It seems, however, that he had an actual immunity to electrical shock when Dan is lone survivor of a bus crash into a power line which kills every other passenger but him. Lionel Atwill has yet another plum part as a mad scientist obsessed with his theory that through electricity those members of the human race considered inferior, "doomed to mediocrity", could be used to form an army of "super-men" willing to obey those of superior intellect in exchange for the needed boost said electrical currents provide to exist day to day. The prize human guinea pig for Atwill's Dr. Rigas is Dan, unemployed after the carnival left town while he was "recuperating" in the hospital, accepting an offer from renowned scientist, Dr. John Lawrence(Samuel S Hinds)to work with them in their experiments in understanding "bio-electricity". Rigas takes advantage of Dan while Lawrence is away at a conference, performing electrical experiments which begin to weaken the poor lab rat until he's so dependent on the juice that he can no longer function normally without the appropriate current.

When Lawrence returns from the conference, he soon discovers Rigas' diabolical dream come to fruition, and before being able to contact the police, is strangled by Dan(who is no longer in control of his own body and mind, Rigas having used so much electrical current almost all of Dan's humanity has been destroyed), John's neck broken. Dan, obeying Rigas' command, admits to killing Lawrence, and is sentenced to die in the electric chair. The voltage in the hot seat only provide Dan with the electrical power needed to break out of prison, killing anyone he touches, his entire body emanating a bright glow. A walking light bulb, Dan inadvertently terrorizes the countryside while making his way to Rigas' laboratory to get revenge.

Anne Nagel is Dr. Lawrence's niece, June, who suspects Rigas when Dan begins to act strangely, zapped of the energy which endeared him to them since his hiring. Frank Albertson is newspaper reporter, Mark Adams, an eager young man with designs for June. Like June, Mark can see that something is wrong with Dan and wants only to help.

Like he would do a little later for Waggner in THE WOLF MAN, Chaney elicits sympathy as a tragic victim, a monster not of his own making. Atwill could portray the mad scientist role in his sleep by this point, and is the true villain of the picture..it's because of him that Dan's condition harms others, the rudimentary cause of the heightened electrical powers created in his subject's changed physiology.

Chaney's friendship with the Lawrence family dog and subsequent loss of exuberance as Rigas slowly removes Dan of his ability to interact with others are methods included in the screenplay(and through Chaney's performance)to root for him to get his eventual revenge. MAN MADE MONSTER has one of the quickest murder trials you are likely to see(Universal had became good at including trials in mad scientist movies, as was the case with Boris Karloff on several occasions). As a die hard fan of THE WOLF MAN, I owe a debt a gratitude to MAD MADE MONSTER for launching Chaney's career, one of the reasons he landed the role of Lawrence Talbot. When we first see him, Chaney is so happy-go-lucky and jovial, what happens to his Dan mirrors the Talbot tragedy not long after in THE WOLF MAN.