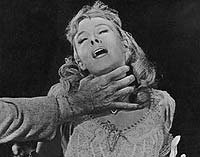 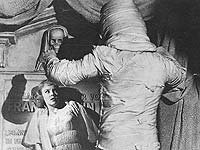 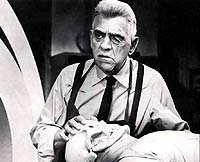 I'm going to defend this enjoyable if unremarkable monster movie, as it's one of the most maligned and battered 1950s horror flicks, and I've never been able to understand why. There are so many things that are delights for horror fans in this film that I don't know where to start.

Let's start with the most obvious: the welcome return of Boris Karloff in a Frankenstein movie. His performance is always cited by fans and critics as being over the top and hammy, and maybe it is. But I consider it to be a self-parody and actually a good deal of fun. Have you ever considered the similarity to the Karloff puppet character of the Baron from MAD MONSTER PARTY... or the classic imitation of Boris (by Bobby "Boris" Pickett) from the song "Monster Mash"? This is the impression I get by Karloff's spoofing of his image in this film - he's an animated, deranged, eccentric mad doctor stereotype - the 'Uncle Boris' of both "Monster Mash" and MAD MONSTER PARTY - except in FRANKENSTEIN 1970 he's not only a puppet or a voice-only singer on the "Monster Mash" record; he's the real flesh and blood deal.

And what is Boris doing? Like the song says, he's "working in the lab late one night" - and very secretly, deep below the bowels of an ancient Gothic castle in the middle of nowhere. Many, many hidden passageways underneath - in a basement laboratory while unsuspecting guests spend the night in the bedrooms above, totally oblivious to what he's doing. He's creating another living man. Of course, it's always pointed out the "absurd" look of the monster - but I've never seen that as an issue, and certainly not when we consider all the other far more pathetic monsters of this era. The creature has basically been described as a "mummy with a garbage can on its head." But what it really is, under all those bandages, is a perfect rendition of a younger and healthier Boris Karloff, molded in the scientist's own image. It's only that its head is still encased in a large cast, and the creature at the point he escapes in the movie is still a "work in progress," so to speak. So now here's a question: would you rather the bandages and head cast had been removed for the creation, thus exposing what would then be a gentlemanly-looking Boris double smiling and shaking hands cordially with everyone around the castle? Not very monstrous, I would think!

For old-time horror fans, this baby has it in spades - misty swamps, stormy nights, shadows and catacombs. For those who like a little more "spice," when was the last time you saw Karloff massage a still-beating heart or produce a jar of eyeballs?

Then there's the cinematography. It was even filmed in WIDESCREEN (though current VHS editions only have the opening and closing credits this way). The opening sequence is brilliant, and very creepy. Atmosphere is established right off the bat. And to compliment all of this is some very tasty horror soundtrack music.

Well, in the end, this is a moody old fashioned '50s horror movie with all the popular trimmings, and a perfect choice for Halloween viewing. I hope Warner releases a DVD of this one day (the print needs work BTW) and it's my hope that more fans will let loose and enjoy this overlooked flick. It's not at all a "great" film (its biggest liability is that the pacing could have been picked up for one thing), but what more any fan could want from a Boris Karloff chiller - especially of this time - is beyond me.

Review by JoeKarlosi from the Internet Movie Database.