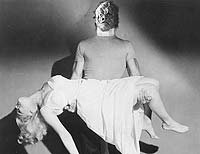 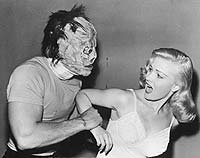 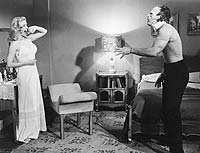 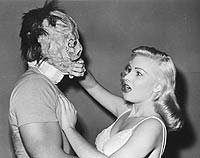 What do Whit Bissel, Donald Murphy and Boris Karloff all have in common? They all played "the last member of the Frankenstein family" within a single year! Boris emoted in Cinemascope in FRANKENSTEIN 1970, Donald Murphy built monsters in a wine cellar in FRANKENSTEIN'S DAUGHTER and Whit Bissel created a teenage monster in the movie I am about to discuss.

As if most teenagers were not monsters already in their own right Whit decides to build an artificial man out of parts from young healthy teen athletes. To keep his creation under control Whit fixes everything except...wait for it...the face. The monster (Gary Conway) has the body of a muscleman but a face that, well, looks like it was sculpted out of clay (which it was!) and when he talks he sounds like someone who is, well, talking through a mask!

Okay, this has already been discussed in detail by other reviewers on this board but everyone seems to have ignored one very obvious gaffe. We all know the classic line "Speak! You have a civil tongue in your head. I know because I sewed it in place myself!" But in that same scene Whit gets a line that should properly have gone to his assistant (Robert Burton). Remember that Whit's Prof. Frankenstein has lived his entire life in England and he is visiting this country for a relative short time. His remark about the newly revived Creature "He should be chattering like a Senator at a filibuster." is far too American a statement to come from someone who is just visiting from another country. It is better suited to Robert Burton's character who is an American. Perhaps if Whit had said "chattering like an MP" (Member of Parliament) instead. Oh well, this is still a fun movie, especially now that the colour ending has been restored.

Points of interest: Gary Conway's real name is Gareth Carmody. He changed it himself because he thought it sounded too "highbrow" for an actor. Robert Burton later went on to battle THE SLIME PEOPLE in 1963. And of course many of us remember Phyliss Coates from "Superman" on television but how many remember she appeared in the 1952 film INVASION USA along with Noel Neill? Both Lois Lane's in one movie! I don't know what became of the alligator, but he certainly seemed to enjoy his role and he does indeed give a convincing performance.

Review by reptilicus from the Internet Movie Database.