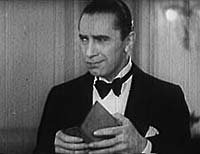 Certainly a unique premise: Death By Television takes what in the 30s was a futuristic concept, and applies it as a murder weapon. It's even more intriguing than space travel would've seemed up through the 50s, as very few of us are John Glenns or Neil Armstrongs, but just about everyone is completely familiar with television. Having tv 80 years ago might seem as magical as projecting holograms from our smartphones would seem now. The technical aspects shown here, as others have noted, went far beyond early tv's capabilities.

The jockeying for the best tv technology would make sense as a good motive for murder. And then there's Bela Lugosi, who makes up for not playing a bad guy by playing his own twin. The mansion works well for the setting. I'd like to have seen more of the lab, though, to build up the plausibility of the 'death-ray' concept. All of these positive elements are diluted to an anemic death by a fairly obvious plot, laborious pacing, inconsistent tone, wooden dialogue, and forgettable performances (except Lugosi's). It actually starts out decently, as we're introduced to the emergent tv business, the main characters, and the fatal broadcast itself.

Then nothing much happens until Lugosi explains the deal to the cast. He has to tell us, because the movie really hasn't shown anything as far as plot development to latch onto. After the stage is set, so to speak, we're on our own. There's some comedy (hardly comic relief), camp, and just outright dumb stuff. At one point, as the characters mill about the parlor, the Chief and Schofield just stare at each other. And then they share a joke--isn't Schofield a murder suspect? (maybe it was Grayson...). This movie might be the longest hour on film. One unintentionally funny bit happens when Isabelle discovers Perry's (Lugosi's) body. I don't mean the stereotypical comments she's made to say, but rather, she literally disappears. Before the scene changes, and the others arrive, all we see is the dead body. It is interesting how Lugosi (as his twin character) recounts this and other scenes; as others have said, the multiple perspective device fleshes out the mystery. The remote-control murder stays within the realm of suspended disbelief, given the parameters drawn for the tv technology. It just seems that a lot more could've been done with the 'death-ray' capability--even if it's only presented as conjecture, which could build tension and fear.

Instead what builds is unconnected elements. In some films from the era of acceptable racsism, the non-white characters have a sort of ironic detachment that can give them a knowledgeable perspective; they know what's really going on. In Murder By Television, not only is Hattie McDonald's character childlike, the Asian character is not even given an obiique chance at a decent performance, as his 'Charlie Chan' lines are repetitive "honorable servant know nothing", etc., and fail to register. In other words, like most of the cast, he's merely boring. Probably the dumbest scene occurs in the kitchen when both of the servants wrestle the intruder. What's the point? The Chief doesn't seem to care about him either, despite the fact that he's dealing with two murders.

Maybe in this era before drive-ins even B movies had to have broader appeal; that explains the mixture of genres, but this didn't have to be such a mishmash.