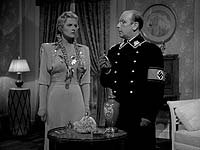 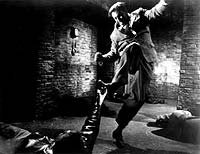 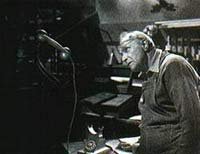 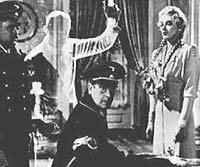 Jon Hall plays Frank Raymond, the grandson of the Invisible Man, who has changed his name from Griffin to Raymond and runs a print shop in hopes of avoiding people looking for his grandfather's formula for invisibility. When Axis agents led by the nefarious duo of Stauffer (Cedric Hardwicke) and Ikito (Peter Lorre) show up and threaten Raymond, he decides to become the Invisible Man and spy for the Allies.

Hall is fine but his character can be irritating at times. The film's worst scene is where he pranks Nazi Karl Heiser (J. Edward Bromberg). The whole scene is a juvenile attempt at laughs that fails badly. Bromberg's character is a perfect example of the movie's main flaw: the out of place comedy within the darker wartime plot. For the most part, Heiser is a joke and treated like Schultz from Hogan's Heroes. But then there are scenes where his darker side comes through that makes the comedy parts a poor fit. Ilona Massey looks great but her character seems to exist just to fall for Hall, even though he treats her pretty crappy. The climax of the movie plays like an action serial with the Nazis pursuing Hall and Massey as they try to escape by plane. What happens next I won't spoil but it's unintentionally silly.

Two characters that actually do work are the evil Stauffer and Ikito, played by Cedric Hardwicke and Peter Lorre. These two are the best part of the film, providing a real menace to the hero. Lorre's Ikito is an especially evil character. He begins the film by threatening to chop Frank's fingers off and later ingeniously (and sadistically) catches him with a net lined with fish hooks! These great actors own every scene they're in and it's worth seeing the movie just for them.

Review by utgard14 from the Internet Movie Database.