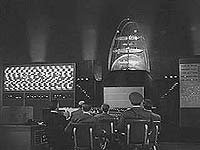 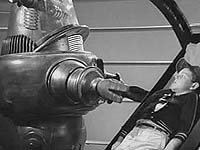 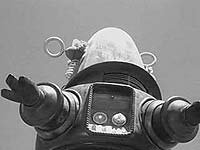 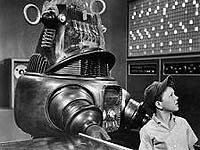 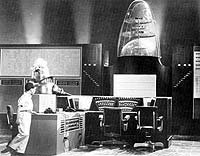 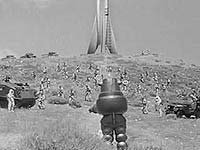 After beating his scientist father at a game a chess, ten-year-old Timmy (Richard Eyer) gets to rebuild Robby the Robot and soon the two of them are going up against an evil computer that has plans on controlling the world.

Obviously the main goal of THE INVISIBLE BOY was to get Robby the Robot back into a picture after he was a huge success in FORBIDDEN PLANET but sadly the end result is pretty much a disaster from the word go. There's no doubt that the decade offered much worse sci-fi movies but you have to say that this here can go down as one of the most dispapointing and especially when you consider that a major company was behind it. There are countless things wrong with this picture including the screenplay, the performances and the overall tone of the thing leads to some pretty bad and rather embarrassing scenes.

I think the biggest problem is the screenplay. I'm going to say that the "plan" by the computer is a pretty good one and when you think about it, the plans at least makes sense. The problem is that the screenplay is so uneven that it's hard to take anything going on very serious. I say this because the overall tone of the movie is that as a children's film and this here leads to some "comedy" moments that are just downright bad at times. Even worse is that we're treated to some really bad scenes that I think are meant for humor but they just come across embarrassing. One such scene is when mommy and daddy are about to mess around and the boy, who has been hiding in the room, starts giggling. What follows is just weird to say the least. The "serious" nature of the film never really comes into play so the rather good idea about the computer taking over the world is just wasted.

The performances really aren't anything to brag about either and that includes Eyer as the young boy. He's certainly not horrible but at the same time he really doesn't keep you entertained. Phillip Abbott is pretty bland as the father but it's Diane Brewster who comes off the worse but I'm going to guess her poorly written character has something to do with this. Even the special effects in the film are pretty bland and especially those dealing with the boy turning invisible. As far as Robby the Robot goes, he's entertaining but basically just gets lost in the background of this rather bad film.