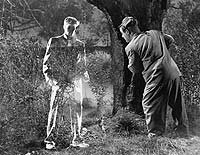 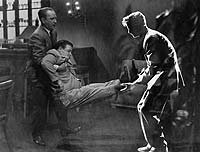 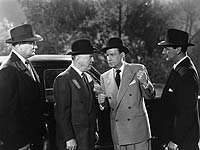 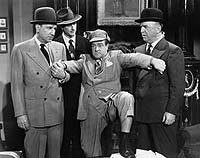 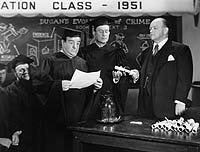 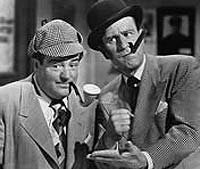 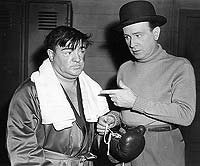 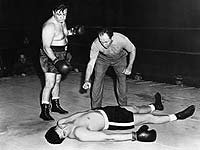 Being present in spirit but not body is a common human fantasy. Such a power could be used to escape from a bad situation, or to achieve a good desired result. On the other hand, it can be used to facilitate the accomplishment of evil deeds. This was true of Griffin: the invisible man in Well's novel, who became a true monster. In contrast, in the present story, Tommy is not a monster. Mainly, he wants to use his invisibility to help solve the murder of his trainer manager.. Toward this goal, he also enlists the help of A&C, recent graduates of Dogan's Detective Training class(DDT). In Wells' novel, it is Griffin who both discovers the formula, and uses it for evil deeds, whereas in this film, Tommy obtains his specific serum from his girlfriend's father, who is a doctor and experimenter.

Expect A&C's standard repertoire of verbal humor, sight gags, and slapstick. An example of sight humor: Abbott tells Lou, holding a gun, to "Let him have it". Lou gives the gun to the bad guy! An example of verbal humor: In a restaurant, Abbott pulls invisible Tommy's Champaign glass toward himself. When the waiter queries, Abbott says "I'm a two fisted drinker".

Probably, the climax of the film occurs with the boxing match between Rocky and Lou(Louie the Looper)plus invisible Tommy. Nobody can believe what they see, with Rocky being knocked around by a seemingly invisible force emanating from Lou. Tommy seemingly abandons Lou for periods during the fight, but comes back to finish off Rocky, whereas Lou was supposed to throw the fight, as pressured by the gangsters sponsoring Rocky. They come to 'get' Lou after the fight, but get taken themselves.

Sexy blond, but bad, Adele Jenkins, as Boots Marsden, flirts with Lou, trying to get him to see things from the Gangster's viewpoint. The other woman in the story is bland Nancy Guild, as Helen Gray, Tommy's girlfriend... Sheldon Leonard plays Gangster Moran: Boots' boyfriend... William Frawley is occasionally present, as detective Roberts, who is looking for Tommy, and doesn't believe various tales of an invisible Tommy(why should he!). A recurring joke is that various people are sent to a psychiatrist when they report experiencing an invisible person.

Review by weezeralfalfa from the Internet Movie Database.