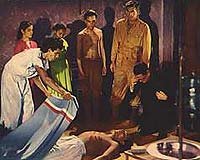 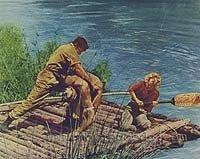 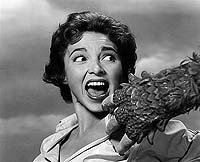 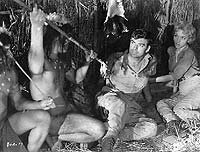 So this is one of those old 1950's creature features that aren't very well heard of. I hadn't heard of it at all until recently. I decided that the creature on the movie poster looked wonderful! Something frightening and different. I liked how the creature resembled a large tropical bird, hence they are in the amazon. So finally, I decided let's give the movie a try. The film gives us beautiful scenery, and hilarious animal interactions that some more educated people could laugh at (e.g. when the "very poisonous snake" drops onto the boat, but upon inspection, it is a common South American boa constrictor). So let's talk about the main aspect of course, the monster itself. I was able to appreciate that this creature made sounds and calls like I had never heard in any other creature film before, it was completely unique. Here is the problem though... near the end of the film, you realize there was no monster at all, rather it was the son of a native chief dressing in a monster costume to scare his people into abandoning the white man's ways, and revert back to the jungle. So as another critic stated, this movie was a mix between a creature feature, scooby doo, and cannibal holocaust (though there was never any cannibalism seen in the film).

I got a bit irritated that the murders and tracks and actions of the monster technically never occurred, which leaves many questions unanswered about who was truly committing the murders. How did Tupanico (the antagonist) make the calls the creature made? How did he murder people without a weapon? It left me scratching my head.

Not a bad movie, but not what you'd really want from a true monster movie.

Review by Julian R. White from the Internet Movie Database.