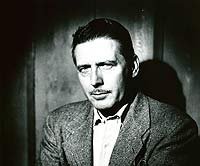 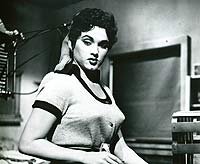 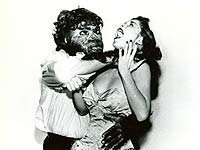 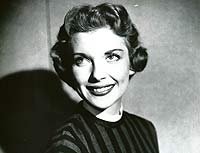 From the minds of writers producers Aubrey Wisberg and Jack Pollexfen ("The Man from Planet X") comes this silly, silly B movie with an irresistibly goofy premise. Unfortunately, it doesn't really deliver on its promise, and can't even work that well on a "so bad it's good" level. It only succeeds in being dull most of the time. That isn't to say that it doesn't have fun moments, though. It will likely come as a disappointment to fans of the German born director, Ewald Andre Dupont, who'd made "Variete", regarded by some as one of the finest silent films ever made. But undemanding fans of this kind of thing may still be amused enough to stick it out.

Robert Shayne of 'Adventures of Superman' stars as Professor Clifford Groves, one of those madder than mad scientists we've all seen who's as crazed as he is because his peers won't accept his theories. (This leads to some absolutely hysterical dialogue as he harangues them.) So what he does to prove he's right is inject a cat in his lab, and later himself, with a formula that turns the cat into a sabre toothed tiger and him into a...well, you can figure it out. His concerned daughter Jan (Joyce Terry) and a stuffy zoologist (an amazingly stiff Richard Crane) do some snooping around while local authorities and citizens vow to do something about the savage killings in the area.

Once again, what prevents this from being more fun is too much talk and too little action. However, it's amusing to watch as an obviously ordinary tiger is used much of the time and then close-ups are done of hilariously unconvincing prop heads. Adding appeal to the proceedings is the impressively sincere acting by a game cast, also including Doris Merrick as Groves's fiancée Ruth, a strikingly attractive young Beverly Garland as waitress Nola, and the late, renowned dialect coach and character actor Robert Easton as a townsman. The cinematography is by the great Stanley Cortez, the original music by Albert Glasser, and the reasonably good makeup by Harry Thomas.

All in all, one could have a decent time watching this with a couple of pals and a lot of beers.