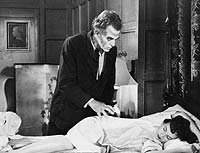 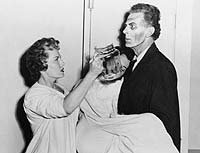 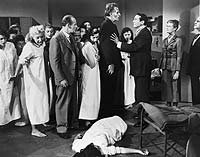 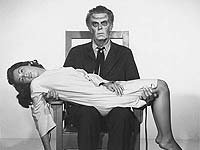 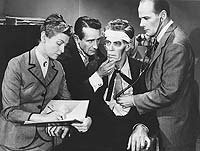 Victor Jory and Ann Doran were fine actors, although they both appeared in some pretty low-grade stuff over the years. However, when William Hudson and Tina Carver are in the cast, you can count on lots of unintentional laughs.

Dr. Murdock (Jory) and Mrs. Ford (Doran) are among the creepy administrators of a girls' reformatory. There have been quite a few "suicides" at the institution lately, so heroic state psychologist Dr. Rogers (Hudson) is called in to investigate. What he uncovers is an ongoing cycle of rejuvenation of the old guys who run the place (most of them are around 200 years old), and of course the bodies of young women are needed for the process to continue. (Funny how no one ever needs young male bodies...but whatever.) The end of the movie has Dr. Rogers saving his new girlfriend Carol Adams (Charlotte Austin) while the evil reformatory staff perish in a fire.

Hudson is actually pretty good, and it is unusual to see him as a good guy. Jory and Doran are rather restrained (maybe they're embarrassed) but they both deliver good performances. However, it's always fun to watch Tina Carver (here she plays a reformatory inmate), because...well, no one can scream quite like she does. The movie's premise isn't really that original, and the sets are pretty cheap (the inmates' life forces are sucked out while they're immersed in a stainless steel tank) but the film has a certain weird charm to it. It's not a standard 1950s horror flick by any measure. I rather liked it, and it's just offbeat enough to hold your attention.

Review by mrb1980 from the Internet Movie Database.