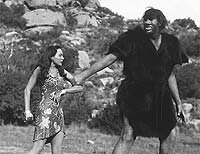 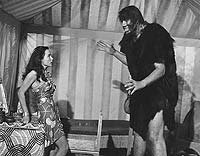 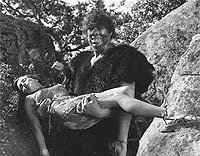 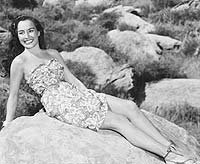 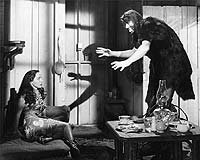 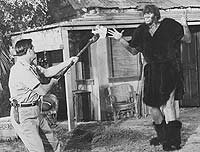 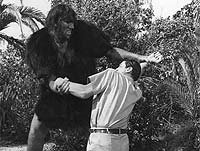 Some mad scientists are using a tribe to obtain wild animals for them to use in experiments to develop a viral weapon which pacifies people into submission. They are doing this in a rocky valley which is also inhabited by a man-ape of towering stature. Into this situation comes Jungle Jim and Tamba the chimpanzee to sort it all out. The man-ape is eventually destroyed by Jim which is a bit unfair as the man-ape tries to free the captive animals and only wants protect his domain. He does have a yen for a pretty girl in a sarong but Shari the native nymph is certainly worth a second glance.

Johnny Weissmuller plods along as Jungle Jim and the rest of the cast do the same apart from Carol Thurston of course as feisty Shari who gives the liveliest performance. Max Palmer as the man-ape shuffles around but without much menace though his furry boots were pretty awesome. The director Spencer Bennett made some excellent serials in the 1940's.