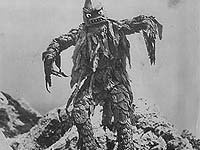 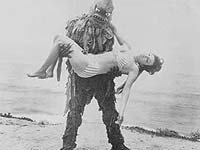 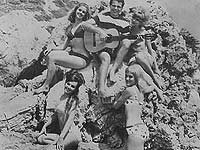 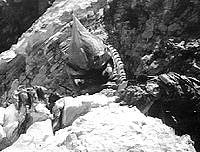 "The Beach Girls and the Monster" features a clear shot of Sue Casey speaking on the phone during the trailer. With a boom mike above her. And the perch.

The movie itself has a delightful scraping the barrel approach when it comes to exploitation. You can find the two main sub-genres from the 60's b-movies melting: the monster movie and the beach movie. Both aspects are indeed badly done. The monster is everything but frightening and one has to wonder why any of his victims hadn't the idea to kick him between the legs. And the beach part is so cliché ridden it looks like a "Lord Loves A Duck" sequence, except for the fact that "Lord Loves A Duck" was a parody (also featuring boom mikes on screen). There's for instance, for comic relief, a ventriloquist and his lion Kingsley who duets with the girls on a corny song. Actually, he could be the worst ventriloquist on Earth: he carries a false beard to hide his moving lips.

Then, you find all the features of cheap exploitation movies. Washed-out actors playing the parts of supposedly attractive characters. "Teenagers" that were last seen in high school 15 before the shooting. Big names on the credits, like Frank Sinatra. Even if you must add "Jr" as that's his son, Frank Jr, and he merely wrote the score (mostly lounge jazz and a few Beach Boys attempts). Actually, Mark (Walter Edmiston) looks a little like Sinatra as the sculptor that Sue Casey teases. (By the way, his sculptures are not exactly flattering even for a fading beauty like Ms Casey.)

Jon Hall, for his only directing credit, shot the thing cheaply and quickly. His house was a convenient place for inner shots and he tends to use zooming extensively to end a scene without making another shot. It's irritating even when it's Luchino Visconti who's directing and Jon Hall is apparently no Visconti.

And there's the story, or indeed the lack of story. You also know that a movie has got a problem when Robert Silliphant is credited for "additional dialogue". Silliphant took a writing hand in both "The Creeping Terror" and "The Incredibly Strange Creatures Who Stopped Living and Became Mixed-Up Zombies!!?". In other words, he's responsible for two of the lamest screenplays of all times! "The Beach Girls and the Monster" is his third and final screen credit. So I have to wonder how much Silliphant improved the original screenplay.

On the plus side, the girls on the beach (actually the dancing troupe from the Whisky-A-Go- Go club) have tight bikinis and giggles as if they were Shakira's mother.

Review by El Bacho from the Internet Movie Database.