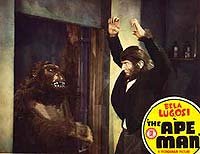 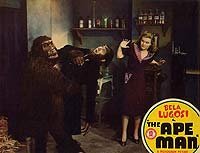 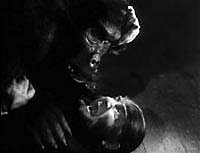 "Some Spoilers" One of the many films that Bela Lugosi made for Monogram Pictures as well as among the other bargain-basement Hollywood studios that he worked for during his "Lost in the Wilderness", as well as heroin addiction, phase of his career during the 1940's and early 50's until he kicked his drug habit. It was also around that time that Bela met the great cult and bad movie director Edward Wood and made the movies, that we all know and love him for, that made Bela Lugosi the legend that he is today some 50 years after his death.

"The Ape Man" is pretty standard stuff in the movies that studios like Monogram put out back in those days. A prominent scientist Dr.James Brewster, Bela Lugosi, makes a major discovery about the link between man and primate but not being able to test the serum that he discovered on human beings, for it's against the law, tests it on himself where he becomes a half man half ape "missing link". Brewster finds out together with his associate in the discovery Dr. George Randall, Henry Hall, that the only thing that can bring him back to normal is human spinal fluid that if extracted from a person will instantly kill him. Dr. Brewster with the help of an ape, that he has in his laboratory, goes out at night and kills a number of people in order to get the valuable spinal fluid. All goes well until Dr. Randall refuses to participate any more in Dr. Brewster's mad scheme where Dr. Brewster in an insane rage kills him.

Later in the movie Dr. Brewster with the help of his partner, the ape, kidnaps beautiful newspaper photographer Louise Currie, Billie Mason, but when Dr. Brewster is about to extract Billie's spinal fluid the love sick ape, who took a liking to Billie, attacks and kills Dr. Brewster during a long and bitter struggle. The ape chases Billie all around the laboratory until Billie finds the secret passage, with the help of her fellow reporter and boyfriend Jeff Carter (Wallace Ford), and escapes into his arms as the police, who Jeff called for help, who blasts the ape with a hail of bullets that kills him. As the movie is ending we see both Jeff and Billie go off into the sunset, it was really moon-light, and I guess lived happily ever after.

There's nothing really that great about the movie "The Ape Man" unless, like me, you're a Bela Lugosi fan and Bela does lift the movie up a couple of notches making it if it's not scary both cheesy and campy. Louise Currie is very nice to look at and the rest of the cast did a very good job with the material that they were handed. The guy who played the ape, Emil Van Horn, made a monkey out of himself wearing a gorilla suit with him flinging his arms and grunting during the entire movie. Van Horn's or the ape's fight in the end with Dr. Brewster, as Billie was trying to get away from the carnage that resulted from it, was both exacting and suspenseful.

What really annoyed me about the movie was that skinny and goofy looking reporter, Jack Mluhall, who popped up in almost every scene in the film as well as acting like a jerk and spoiling any tension and surprises that there were in the movie. Mluhall also got somewhat of an ego trip as the overbearing and annoying reporter in telling those of us watching, at the end of the film, that it was he who wrote the story that we just saw on the screen. At least someone like Alfred Hitchcock, a far better movie maker then Jack Mluhall, who was in almost all of the movies that he directed had nothing more then a cameo appearance in them. This guy wanted to be the star of the movie!