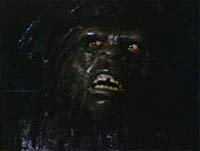 Pierce is a small time filmmaker who made a couple of films of note. One was The Town That Dreaded Sundown and the other was The Legend of Boggy Creek. He also made a sequel to Boggy Creek and then this one. So yes, he made three Boggy Creek films, but the third one is called the second one. This one would have the fortune or misfortune, of being featured on Mystery Science Theater 3000 and for good reason, it is kind of bad. Granted, it was more enjoyable than the second of the Boggy Creek films, which had a whole lot of nothing going on and the climax of the film was essentially the creature helping two kids out of the swamp. You never really got a good look at the creature in that one at all! Here, you see it from a distance right from the get go and you see it numerous times throughout. At least this time they were not afraid to show us the creature, who sadly is not quite as scary as Old Man Crenshaw!

The story has a professor at the University of Arkansas going into the swamps and muddy bottoms to try and track down the infamous Boggy Creek creature. He brings two of his students and a friend of the female student into the swamp to track down the creature. During the first portion of the film we are under constant assail from flashbacks! At one point, you get two nearly back to back. Then the girls go on a pointless misadventure, before the film reaches its climax at Old Man Crenshaw's place! They could have seriously made a film just featuring him as a berserk super hillbilly from hell that skins his victims alive and trying to mate with the females! Instead, we just get the Boggy Creek creature busting in and then leaving.

This film made a very funny episode of MST3K. It was really ripe for riffing and is funny throughout most of the episode. The only slow stretch was the two girls and their misadventure in the jeep as it just seems to go on forever. However, once they go to Crenshaw's place it picks up again. They make fun of the flashbacks in a funny bump segment and you can feel their pain as they watch the horrific tale of the man who was apparently a lawyer who cleans himself up with the Sears catalog.