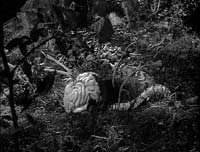 An okay-to-good '50s monster romp which suffers from a lack of action in the first hour - but more than makes up for it in a thrilling finale which involves a bunch of people being trapped in a farmhouse while the monsters mass and attack outside. Before this we have to put up with a bunch of unlikeable, clichéd characters shouting and fighting each other. Firstly there are the dumb, heavily-accented "country folk" who blame the murders on the new scientific research station in their midst; then the wooden, stern military officers who romance the ladies and save the day.

Marshall Thompson stars in this film, and he puts in the same stoic, expressionless performance as he did in FIRST MAN INTO SPACE, playing exactly the same character too. Nobody else figures much in the story, which is populated with the kind of stock characters you always see in these '50s flicks - the female assistant with the tight sweater, the old fuddy duddy scientist, and the military chief who absolutely will not, no, cannot, listen to reason.

Although supposedly set in America, this was filmed in England, and works wonders on a tight budget. To liven up the snail pace of the first hour we have a few creative death sequences which manage to be effective despite having no special effects at all. You see, these monsters are invisible, so the actors and actresses have to pretend to be attacked. What makes these potentially-laughable attacks work are the gloopy, gooey sound effects loudly imposed over the on screen action. Things move on to a shot of an invisible monster moving through bushes, a door and then a house, all achieved with some clever effects a la THE INVISIBLE MAN.

Viewers need to take a break from reality while watching this, as the explanation for the creation of the monsters has to be one of the most unbelievable I've ever heard - I won't go into it here because it's too confusing. Thankfully, when the monsters do eventually become visible, they're nicely designed, all brains and tentacle and slithery tails (also doubling as spinal cords, as it happens). The superb ending sees a ton of these "fiends" shot at, and they bleed strawberry jam all over the place and rot away in some surprisingly graphic moments which foreshadow the disgusting disintegrations which marked the destruction of the disturbing demons in THE EVIL DEAD. The stop motion effects used to animate them are brilliant, and a must-see.

This exciting finale has obviously been quite influential in the genre - check out the scene where the heroes barricade themselves in a room, hammering planks over the windows while the monsters mill around outside - recreated almost shot-by-shot in Romero's NIGHT OF THE LIVING DEAD. I've no doubt that the designers of the facehugger in ALIEN saw these monsters beforehand too. Check out the hilarious bit where the old fuddy duddy runs outside and is immediately devoured by three of the creatures. "He was a brave man" says one bystander - stupid, more like! Usually I would rate this film higher, but it's only average because the first hour (below average) outweighs the final twenty minutes (superb).