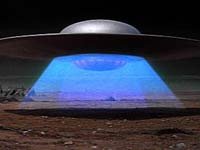 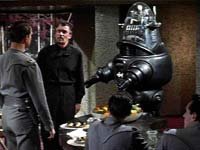 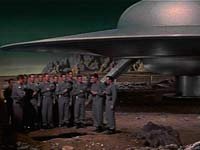 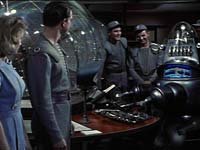 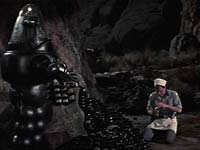 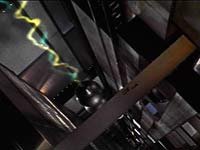 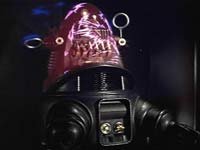 Wilcox, "Forbidden Planet" opens in the 23rd century, with Commander John Adams (Leslie Nielsen) of the starship C-57D landing on the planet Altair IV. Adams attempts to make contact with a human colony that was established on the planet several decades earlier. To Adams' surprise, this colony has perished. Only Dr. Edward Morbius (Walter Pidgeon) and his daughter Altaira (Anne Francis) seem to have survived.

Late in "Forbidden Planet", it is revealed that Altair IV was once inhabited by a race of aliens known as the Krell. Though the Krell are now extinct, Altair IV still possesses vast, subterranean caverns packed with working Krell technology. Doctor Morbius becomes obsessed with this technology, determined to learn its secrets. Morbius rationalises these obsessions – the alien machines may one day benefit humanity, he insists – but Capain Adams begins to suspect that something more sinister is afoot.

"Forbidden Planet's" final act contains a shocking revelation. Aided by a machine capable of materialising conscious and unconscious desires, the Krell wiped themselves out. Using this same technology, Morbius destroyed all human colonists on Altair IV. He did this to preserve his monopoly on both Krell technology and his own daughter, a young woman who is adored by colonists, Adams' crew and whom Morbius himself has psycho-sexual longings for.

Interestingly, Morbius is unaware that he has been slaughtering people. So blind is Morbius, that Adams must spell things out for him: "The machine instantaneously projects solid matter to any point on the planet, for any purpose!" Adams explains. "But like you, the Krell forgot one deadly danger – their own subconscious lust for hate and destruction! And so those mindless beasts of their subconscious had access to a machine that could never be shut down! The secret devil of every soul on the planet all set free at once to loot and maim! And take revenge, Morbius, and kill!"

Morbius, a man of science, has thus become warped by his own ego, his own unconscious, his own desire to play God. This kind of science bashing was typical of 1950s science fiction films, which tended to associate war and murder with technological advancements, scientists and an "insurmountable human nature", rather than politics, class and economics. Where "Forbidden" differs from these films is its thick Freudian subtext ("The ego is not the master of its own house," Freud once wrote, "and the mind is like an iceberg, with only one seventh of its bulk visible!"). In Wilcox's hands, man dare not risk exploring outer space unless he first confront the forbidden planets lurking between the ears.

Along with "The Thing", "The Day the Earth Stood Still" and "Invaders From Mars", "Forbidden Planet" remains one of the best science fiction films of the 1950s. Produced by MGM studios, it was also one of the first attempts at a big-budget, "serious" science fiction film, utilising glossy Deluxe Color, expansive CinemaScope and a script (loosely based on Shakespeare's "The Tempest") with high-brow pretensions. In keeping with producer Nicholas Nayfack's desire for cutting-edge spectacle, the film also utilised meticulous rotor-scoping by Walt Disney animators, and an innovative, entirely electronic film score. The first of its kind, "Forbidden Planet's" score predated the invention of music synthesisers by about eight years.

Modern audiences will no doubt scoff at "Forbidden Planet". But to those interested in early 20th century science fiction, the film offers many pleasures. Today it resembles a kind of meticulously constructed, retro artifact, filled with charming gadgets, robots, lasers, eye-popping colours, giant matte paintings and sets zanier than Frank Sinatra's living room. Sculpted by the finest craftsmen of its era, the film seems simultaneously modernist and unaware of its impending obsolescence; the world of tomorrow according to the world of yesterday.

Despite its age, "Forbidden Planet" still boasts a palpable sense of menace. The film contains one famous sequence in which a "Monsters of the Id" attacks our heroes, a sequence which scared the hell out of 1950s audiences, and which would influenced a number of subsequent film directors. This monster is handled cleverly throughout the picture, Wilcox hinting at its presence with foot prints, casts of its claws and the ripples of energy which momentarily illuminate its invisible body. Elsewhere the film contains cinema's best aliens outside "2001: A Space Odyssey" and "Solaris", which Wilcox never shows, but hints at, alludes to and keeps resolutely alien.

In a 1970s interview, Gene Roddenberry would claim that "Forbidden Planet" didn't influence his "Star Trek" franchise. Most film historians, however, cite "Forbidden Planet" (along with the 1950 novel, "The Voyage of the Space Beagle") as a large influence on "Star Trek". Within Wilcox's films we thus find precursors to "Star Trek's" transporter devices, along with Roddenberry's fondness for abandoned outposts, mad scientists, saucer-shaped spaceships, crews modelled on the US navy, and lots of chauvinists, gratuitous flirting, short skirts and bosomy young women. In 1950s science fiction, the girl next door is never more than a light-year away.