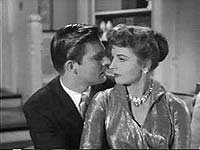 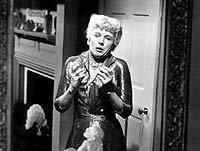 Colleen Gray, the leech woman of the title, was born in Nebraska, a farmer's daughter, and she looked it, cream-fed, sort of, as fresh and pretty as a field of sunflowers. She really was active for only three or four years, from, say, 1947 to 1951. Her clean, conventional Midwestern beauty notwithstanding, her career never took off and this film gives some indication of why it didn't. Her range as an actress was limited. She was perfect as the tough, loyal, and cheerful wife or girlfriend of the hero in "Kiss of Death". In "The Leech Woman" she's required to display a wide range of emotions and to do technical tricks with her voice and body, and she's not convincing in the role.

Not that the role deserves more talent than she was able to bring to it. The story is disjointed and primitive in outline and execution. I've seen better stories in comic books from the 1950s.

Try to follow this. I'll make it as painless as possible. Philip Terry is a practicing endocrinologist. (Kids, that's a gland specialist.) Gray is his alcoholic wife. Both are middle aged. Terry discovers from one of his patients that there is a youth elixir used by a "tribe" in Africa. It changes you from old to young but after it wears off in a day or so, you die. Terry hustles his wife along as he follows his patient back to her tribe on a "trek." The "jungle" is a studio set and the general atmosphere and iconography is that of the 19th century. Everyone dresses in pith helmets and safari jackets from Banana Republic, probably leased with an option to purchase. Once in a while the safari stops and someone points off screen and some stock footage is inserted of a monkey in a tree, a shuffling pair of lions, or a crocodile sloshing into a river.

They arrive at the "native village", where Terry's patient tells them the secret of the youth elixir. In fact, she demonstrates how it works. You see, you have to drink an infusion of something that comes from a rare orchid and -- oh, yes, you have to chase it with some fluid from somebody else's lanced pineal gland. Good for the user, bad for the poor guy who sacrifices his pineal gland. Well, I'll tell you, it certainly does a job on Terry's original elderly African-American old lady. Behind a puff of smoke she turns into a knockout.

Terry then insists that his wife try it. It will bring them together again. She's so grateful that she weeps against Terry's chest, but Terry is too stupid to shut up. He goes on oleaginously about how lovely she will be again. I think any red-blooded male will know where Terry is coming from. Colleen Gray certainly does, and she's bitterly disappointed. So when the time comes for her to be transformed into a youthful girl again and she can pick any man she wants as the pineal provider, she picks -- Terry! She may be middle aged and debauched, but she's not brain dead.

Poof, and she's a beauty again, at Terry's expense. (The potion gives you a new hair style too.) Actually she was 37 when this was shot and she looks quite alright, having only acquired a bit more heft since "Nightmare Alley" and having come to resemble Anita Ekberg, another actress of the same period, only without the mass. This isn't so evident until we get back to the states, where she poses as her own niece, flipping back and forth from old age to youth again, depending on the availability of hapless pineal providers. Back home, she's all glamorized while playing her niece and trying to seduce her lawyer. She wears dresses with tight bodices, cinched waists, and troublingly tight skirts. "Troublingly" because it must be hell, trying to walk in them. Or so I imagine. I wouldn't know. I don't wear dresses myself except for exceptionally important dates on Saturday nights.

But why go on with this slapdash farce? The cops discover her secret, track her down, and while she ages on screen under the horrified stares of the two detectives and her lawyerlover, she falls or throws herself out of a window and crashes to earth, dead and withered.

There's something to be said for being old and dying. It's the great leveler. "Golden girls and lads all must as chimney-sweepers, come to dust." It doesn't matter if you're a knave or a king. Or, as the stereotypical Great White Hunter advised Gray back in Africa, "There is only one trouble with running away. You always meet yourself when you get there." Now, I don't know if the writers were dabbling in the space-time continuum or Four Quartets, but Einstein or Eliot, they managed to hit the nail on the head. The only way to deal with old age and impending doom is not through this obsolescent impulse to be beautiful for him, but to do it the French way. You shake your gray hair, shrug your arthritic shoulders, and say, "Pass the wine and the escargot, please." You say it in French, of course.