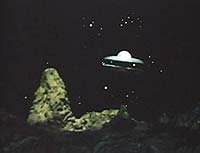 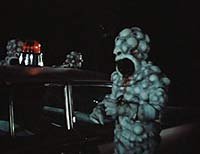 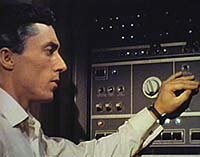 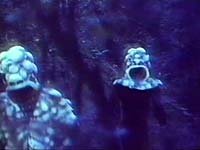 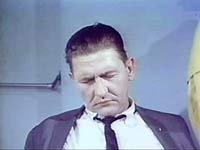 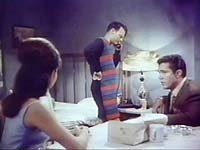 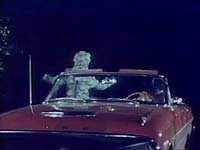 Oh, the joys of cheap films! Knowing a movie has no budget and will probably be technically inept is actually a rare treat because it gives us so much to look for while we're watching the movie. The most notable thing about "The Eye Creatures" is that it is supposed to be about a small-scale alien invasion that takes place at night, yet so many of the scenes are obviously filmed during the daytime. The "plot" concerns a group of "teenagers" who discover that aliens are out to invade the local wooded make-out spot. The creatures are weird-looking humanoid things with sharp talons, and they are covered with eyeballs all over their bodies. Well, most of them are covered with eyeballs, some of them only have part of the costume on, so they look a little unfinished.

I rate this movie a lot higher than it technically deserves simply because it is one of those no-budget films that understands how to entertain its viewers. If you had to make a movie and you had only about $16,000 to do it, this is exactly what it would probably look like. If they had been earnest about making this movie, it would have been truly unbearable. The people who pan this movie for being "terrible" probably only think so because they saw it on "MST3K" and therefore someone has already told them that they should think this movie is bad, and that the only way to watch it would be with the commentary of "Mike and the Bots".

This is only true if you have no imagination of your own; this mentality is the reason that the "laugh track" was invented for television comedies. Yes, the commentary on MST3K is often hilarious and a lot of fun. But why on Earth would you need someone to tell you what is funny about a film like "The Eye Creatures"? You can see it right there on your screen! In fact, this is where the entertainment value lies in a movie like this, and the filmmakers obviously are in tune with this. They knew they couldn't make even an adequate sci-fi monster movie with what they had, so they made it absurd in a hundred little ways.

I remember "The Eye Creatures" from when I was a kid, it was one of those movies that was always shown on syndicated stations. The disembodied alien hand crawling around is something I'll never forget--well actually it's more like a disembodied alien glove.

Review by GroovyDoom from the Internet Movie Database.