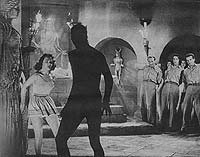 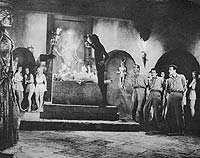 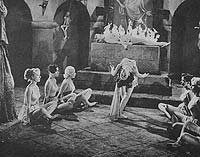 Somebody else mentioned the shocking level of product placement for Longines watches (and we thought that placement was new in the movie "2001"). What nobody else here has touched on is that dreadful loooooonnnnngggg scene in the observatory in England near the start of the movie where the secretary spends about 20 minutes (well, almost) just walking down the long stairs to bring a report to the chief astronomer, and then spends almost as long going back up (including opening and shutting the safety gate on the stairs...) Yes, truly a movie in which the concept of editing was only a slogan!

The rest of the comments above by previous commentators say it all, but I must point out that in the early days of analogue ship controls, all piloting functions appear to be digital, carried out by switching the positions of just two levers (in binary sequence?) to do everything - take off, land, dodge meteors, change course, etc... Even better, when the crew report in after quite a long flight, we cut back to the control centre on Earth, and yes, nobody has moved from their pre-launch positions! (Were their shoes nailed to the floor?)

In Britain, we don't get to see MST3K, so I watched this as a late-night stinker, and loved it. I shared the movie with friends on tape, and still feel that it's amongst the funniest B movies I have ever seen, right down there with Plan 9, and without the excuse that it was made by Ed Wood Jr!

Review by Michael Jacobs from the Internet Movie Database.