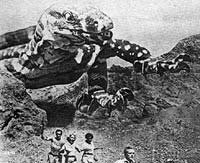 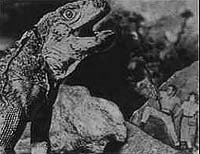 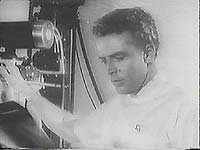 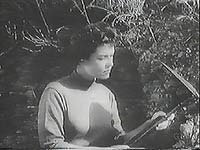 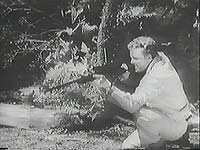 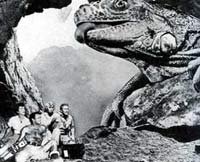 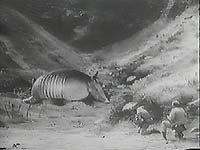 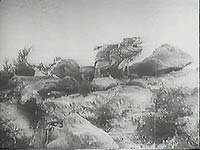 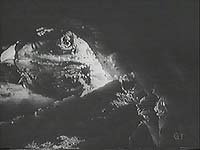 The film begins with a narrator telling us about how a new planet has moved into our solar system (?!). There are many shots of what looks like Mount Wilson or Mount Palomar Observatory as they "discover" the planet (even though in reality you wouldn't need "the most powerful telescope in the world" to see a new planet right next to Earth). Yes, this is a kind of a silly sci-fi adventure movie that begins very seriously as if it was a docu-drama about space exploration. But the scientists in this movie are the kind that don't even carry a compass and don't have any idea how long the daily light cycles would be on this new planet ("it might spin faster than the Earth" says one big busted female scientist). Notice how the male scientists carry rifles and the female scientists carry pistols, and the men collect firewood while the women collect kindling. Good patronizing stuff, even if they do have a blonde chemist! I love how the outer space expeditions in these movies look more like they belong in a jungle movie than a sci-fi movie. These people aren't fazed at all by seeing normal earth wildlife on the strange new planet. Of course the strange new planet has an uncanny resemblance to Griffith Park.......

And then there's the "strange island" that one of the woman just feels drawn to... gotta love how the women in these movies have strange urges like that which make them wander out into places they shouldn't go.

The first really hilarious scene in the movie is when the two blonde scientists (yes there's a blond guygirl and a brunette guygirl) go off for a walk together. He stumbles on something and literally hurtles himself into a ditch where he has to battle a crocodile. It's the classic sexdeath connection just like in the slasher films 20 years later... don't go off into the woods with your gal, never mind what planet you're on! The dialog in this movie is just painful at times. These are scientists who don't even speak English with good grammar. And the film's idea of good snappy dialog is to have the injured scientist say stuff like "I need some medicine" right before kissing his gal. Ugh.

Bert I. Gordon movies are so great. This is his first movie and he's already up to his tricks. Just like how the spider roared like a lion in "Earth Versus the Spider", in this one we have a roaring snake! I guess Bert Gordon didn't think that a monster was scary if it didn't make noise. Maybe he's right, but it sure is goofy on screen! Logic shouldn't get in the way of the movie. Even though they have been attacked by snakes and giant insects, the leader scientist decides "we haven't run into anything we can't handle" and decides to split up the party so he can go investigate the island. Even though they already said that exploring the island was not supposed to be part of the expedition, they brought 2 rafts along in their spaceship.

I guess I should expect to be disappointed but sadly when we finally do see "King Dinosaur" it turns out to be just an iguana photographed with rear projection. "It resembles the T-Rex of ancient Earth".... well not really but nice thought. Of course the hero's rifle jams up so they have to run into robot monster cave. Hilariously, after all the things that they have seen the hero says "nobody is going to believe this!" as if a planet comes into our solar system full of meercats and bears all the time but a giant iguana? Never! Of course a giant alligator shows up to distract the ignuana, just like in the old H.R. Haggard movies. From the way they battle, I don't think this movie received the blessings of any animal rights organizations. They don't run for it for some reason but then later they decide to run away when a gila monster attacks "King Dinosaur." In the meantime the action has caused him to take off his shirt and her skirt to get ripped up the side, allowing for some nice 50s light exploitation. The other couple has been called to the island by way of flare gun apparently so they can sit there and say "over here! go faster!" to the other two without doing anything to help them. And then the blonde scientist says the best line in the whole movie: "I brought the atom bomb. I think it's a good time to use it." I mean, smart scientists usually destroy alien species as soon as they encounter them.

Next thing you know, we have a giant armadillo! Who knew it was a Tod Browning movie? (sorry, kind of an inside joke... watch "Dracula" really carefully and you'll see what I mean). There's even some bison and a woolly mammoth. Why the "dinosaur" doesn't just eat those instead of the tiny humans is another question better not asked.

And then let's not forget the cryptic lines at the end of the movie. "Well, we've done it." "Yeah, brought civilization to Nova."??? Was it supposed to be ironic? Who knows.

I can't say the movie was supposed to be funny or that it was a good movie, but I enjoyed watching it.

Review by funkyfry from the Internet Movie Database.