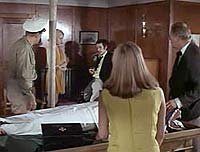 Suggestive Spoilers This is one of these movies you can remember watching on television one Friday night many years ago and thinking was a great movie. When you see it again after a period of a couple of decades you spend much of the running time on the rewatch thinking " How the heck did I find this enjoyable in any way? " but then a couple of scenes appear and you can see why you found it enjoyable when you were young enough to have not developed overly critical abilities. In short the memory has cheated making you forget all the dire bits and bigging up the fun moments. Certainly THE LOST CONTINENT is a fun film but only intermittently

To say there's something uneven with the screenplay is an understatement. The first half manages to combine contrivance, banality and boredom all together which is no small feat. If you've got a cargo of yellow oil drums that have " DANGER HIGHLY EXPLOSIVE MATERIAL DON'T GET IT WET UNDER ANY CIRUMSTANCES " warning signs splashed all over them you can just imagine this might some baring on some plot turn later on in the film, especially if the film spends five minutes explaining through its one dimensional ship's crew just how dangerous this stuff might be. Especially if a hurricane is coming. Just when you think it might be a disaster movie featuring shipwrecked survivors struggling to stay alive on a lifeboat the film mutates in to something entirely different so much so you'd be left thinking why this aspect wasn't developed earlier since the first half is entirely boring in comparison

I'm not saying the second half is good from an artistic point out of view but it is thoroughly entertaining as long as manage to suspend disbelief which is very difficult when the film throws everything including the kitchen sink at the audience. There's enough plastic monsters and ideas here to fuel an entire season of DOCTOR WHO. Perhaps the most striking thing is some of the design work where people can walk on weed infested water because they're wearing giant balloons strapped to their backs. Don't bother to ask where these survivors of a 16th Century Spanish fleet managed to acquire them or what they've been eating for several Centuries because it's not that type of movie

To give the cast credit they do try and make the most of their painfully underwritten clichéd roles of woman with a secret past, hip black dude, slutty blonde bimbo, tough level headed sea captain etc. The stand out performance is probably by Tony Beckley best known for his flamboyant larger than life roles and is especially best known by this reviewer for his show stopping role as Harrison Chase in the DOCTOR WHO story The Seeds Of Doom and it's strange watching him as a macho square jawed hero come alcoholic piano player. Also worth pointing out is Dana Gillespie as Sarah though possibly not for her acting talent and when one of the characters mentioned " Sarah is playing her with her balloon things " all sorts of images flashed through my mind

THE LOST CONTINENT is a very uneven film. As many people have said - and it's impossible not to notice it - it feels like two different films welded together by the same cast.. It's silly and entertaining but probably not as entertaining as you might have remembered it. That said it could very well do with a remake involving a more disciplined story structure while keeping the more horror and action based elements of the original.