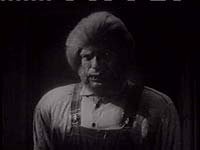 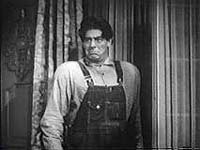 I have always been wary of horror programmers from the Golden Age of Horror, primarily because they degraded such genre icons as Bela Lugosi and John Carradine, who were somehow unable to find work in A-grade films around this time; however, these Z-movies also gave the opportunity for character actors like Lionel Atwill and J. Carroll Naish to have their own star vehicles and let rip with the villainy. Perhaps the most prolific – and unhinged – among the latter group was George Zucco (who, apart from appearing in the occasional prestige production, was also the best incarnation of Professor Moriarty in THE ADVENTURES OF SHERLOCK HOLMES {1939}), and I have decided to incorporate a handful of his efforts in the current "Halloween Challenge".

This film, then, is also one of a quartet I will be checking out revolving around werewolves: PRC obviously attempted to jump on the bandwagon of Universal's latest monster THE WOLF MAN (1941) with this one, but the result is so lame that one would do best not to compare the two. Even worse than a family curse or being 'marked' by lycanthropy is the notion of having someone turned into a monster by being injected with a serum extracted from a genuine wolf (except the film-makers here apparently could only lay their hands on a coyote!). In fact, the real protagonist here is not the creature (played in human guise as a dim-witted Ozark – derived from the Lenny character in John Steinbeck's "Of Mice And Men" – by Glenn Strange!) but the mad scientist (Zucco, of course), with the title further confusing the issue! Incidentally, Lon Chaney Jr. had incarnated both Lenny in the 1939 film version of the afore-mentioned literary classic and Lawrence "The Wolf Man" Talbot!

Anyway, Zucco is the usual disgraced genius who in the film's very opening scene imagines himself lecturing the 4 eminent colleagues who had publicly humiliated him and forced his resignation. This being the war years, his original plan was to build an invincible army of werewolf soldiers(!) but, if the ultra-sluggish Strange was anything to go by, the outcome of these experiments would doubtless have proved disastrous to the Allied cause! In fact, out of his targets, he only manages to eliminate one (the only other fatal attack being completely unrelated to his 'mission', committed upon a little girl whose mother is actually played by frequent Laurel & Hardy foil Mae Busch!)! Strange's werewolf make-up is as much a slapdash job as the script itself, barely concealing his facial features and accentuated by the cheapest of dime-store fangs!

By the way, Zucco has the obligatory clueless daughter who, just as inevitably, is romanced by the very man (in this case a scoop-seeking reporter) who will eventually bring about his downfall. Amusingly, Zucco goes to the house of his chief nemesis with Strange in tow to demonstrate his theory but then contrives to absent himself and have the victim administer the transforming drug to the harmless-looking handymanwhich then takes forever to produce the desired effect, so that the supposedly intrigued man of science has already gone back to his bit of dead-of-night reading, thus being ostensibly oblivious to the change from man into monster!; another intended prey, in fact, is even asked to give Strange a lift to town with the metamorphosis subsequently occurring inside the car in mid-journey! Unsurprisingly, the leading lady eventually comes face to face with the werewolf but is saved in the nick of time, whereas the scientist expires at the hand of his own creation (the former had earlier kept the latter in check by the use of a whip, apparently a pre-requisite of such cheapies!) which, rather than via the proverbial silver bullet, gets his in the fire that consumes Zucco's remote country-house!!

A word on director Newfield: he is considered among the most prolific American film-makers ever (with almost 300 titles to his name over a period of 30 years!); this was actually his very first horror movie (reportedly shot in just 5 days!), which rather explains its considerable narrative shortcomings compared to a more satisfactory later effort like THE MONSTER MAKER (1944).

Review by Bunuel1976 from the Internet Movie Database.