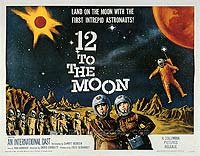 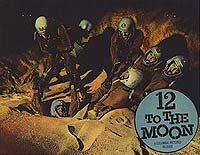 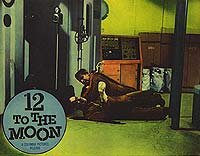 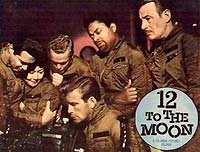 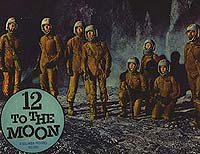 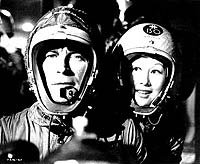 What I really enjoy about this movie is that it wants to be smarter than most other sci-fi movies, but about half way through to the end it really falls flat. I don't agree with many saying that this is the worst and how stupid it is. I suspect most people don't understand where this movie came from and were expecting something much, much different. This movie did what Star Trek would six years later. The notion of a ship commanded by not only people from every other country and nationality, but women also was truly unheard of for the time. People don't realize that in the 60's, women weren't (usually) allowed to do things men were supposed to do and that the world was thrust into the Cold War because of Russia (having come off from WWII less than 20 years prior), so to see people from every nation working together to go to the moon was unthinkable.

The fact that everyone praises Star Trek for many of the same messages that this movie at least attempted to push is astounding. Star Trek had some very, very terrible writing and plots among the good ones, so it should come as no surprise that watching this movie is like watching one of those really bad episodes (especially in the last couple of seasons), but people don't dare talk ill about Star Trek as if it was something sacred. I'm not saying Star Trek is bad, I'm saying that no single movie or TV show is perfect and will have its faults. This movie was ahead of its time like Star Trek was ahead of its time. No one could predict that as we watch reruns today that we have (had) flip style communicators, storing information on tiny discs, etc, even though Star Trek was supposed to be hundreds of years in the future yet (even from today).

That being said, there are a few points where some crew members get into a "we're better than you" feud, right up to the end of the movie too. It's toned down and doesn't come up all the time, but it's there. I guess the producers didn't truly believe a unified world space organization could work as well as they were trying to envision. Yes, they had lawn chairs for seats and you can clearly see a stick holding the "space taxi", but you expect things like that from these old movies. How many times did you watch Rocky Jone's crew strap themselves into those leather recliners and wonder how that could pass for a seat in a space ship? I never see anyone complain about that.

There is also the problem that people put this movie down because of how scientifically inaccurate it is. By the time this movie had come out, there had only been a very small number of satellites put in orbit, one being Russia's Sputnik. No human had been to space until 1961 and no one set foot on the moon until 1969 (this does not include the flights that orbited the moon). So yes, a lot of the science is hokey and there is some very early techno-babble, but it also at least tried to be realistic when they had ZERO idea what space was like, let alone landing on the moon. The use of a bomb-sight was neat because it had levels on it, though it wouldn't be much use in space, it reminded me of what could be considered a gyroscope. When one crew member is showing another the use of "magnetic tape" to take and record pictures before printing one out like a Polaroid, that was also something ahead of its time as it was just barely starting to catch on.

Some of the movie does falter in science (but you have to understand that they didn't have the resources like they would decades later for the info needed to research), like having to keep the engine running full blast to propel the ship forward when there is no inertia to actually stop a ship (or other objects), thereby not needing to keep the engine running. No zero-G and no explanation of why. All these things do kind of take away from the film, but if you keep in mind that they "just didn't know" and literally had to make it up as they went, then you won't have much of a problem with it. At least they didn't try to use cardinal directions like some other space movies I've seen. "They're coming from the north! Wait, which way is north in space?"

They also do have a lot of the usual sci-fi movie tropes from this era, like you can't go into space without being attacked by a rogue meteor shower or some strange energy field that came out of nowhere and you 'just can't avoid it' even though all you have to do is go around. I'm not going to be harsh about it, though, because how many movies today do the same thing? How many movies about going to Mars end up with the ship destroyed or crew dying just going to Mars? If Hollywood ideas were real, we wouldn't go to space for anything. It's the same ideas, just different generations.

In the end, it's not as terrible a movie as some make it out to be. It at least tries to be smart and give you a message. If you want bad, go watch Plan 9 or any sci-fi movie from France and Italy.

I don't often write spoiler reviews, but the ending was just so far out of left field that it left the park. I can buy into the whole 'aliens on the moon' shtick and bad science, but the end of the movie just made me scratch my head. The aliens warn the crew to leave the moon (after kidnapping two of their member who suddenly "fall in love" for no reason) and tell them to never return or there will be dire consequences (all I can hear is Eros from Plan 9, "your stupid minds. Stupid, stupid!"). The ship returns to Earth to find it suddenly frozen... by the aliens. I didn't see any reason for them to attack Earth the way they did since the ship and crew left just like they were asked and the needless killing of two members while trying to drop a bomb into a volcano was just downright ridiculous.

Oh, what's that? You just read "drop a bomb into a volcano" and you're confused? Yeah... a lot of the techno-babble and pseudo-science can be easily swallowed, but they get this BRILLIANT idea to drop a nuclear weapon into a volcano to thaw the Earth. I'm not sure which part of that the writers thought would make sense, but even for making things up, someone had to be smoking something to think of that. I can think of many terrible outcomes for doing something like dropping a nuke into a volcano, many of which would be the next big Earth disaster mega-flick.

By the end, the aliens see that the crew tries to unfreeze Earth and that two had committed suicide and decide to be friends after all. I mean, why not? It was just so corny of an ending that it makes you really love to hate to love it.

Review by cujoe_da_man from the Internet Movie Database.