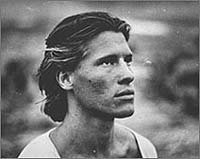 In the final years of the Soviet Union, a Russian doctor arrives in a godforsaken town in the middle of a desert in Turkmenia (the place that would become a few years later the independent state of Turkmenistan, one of the least known and more mysterious countries of the world). His mission there is not clear, though it is apparently to investigate why old believers get fewer ailments than other people. But soon, a series of mysterious things will happen to him.

Shot in a very opaque style and with a photography almost drained of color, this movie promises in the first quarter of an hour that it might be interesting if very unconventional, but it soon descends into absurdity. It ends up being a complete mess.

Director Alexander Sokurov has made some interesting films after this (Russian Ark, for instance, or some of his documentaries) but this, one of his first movies, is basically unwatchable.

Filmed mostly with a fly on the wall - style (there are very few closeups), the shortcomings of this film are too many to mention. But to mention a few, the actors look like zombies, delivering lines with zero expression (this is fault of the director, not of them). The plot becomes incomprehensible -' not that the director seems to care much about that. And though this was shot in present day Turkmenistan, very few Turkmen appear -' mostly as far away props.

Based on a well regarded science fiction story by the Arkady and Boris Strugatsky -'though in no way this movie can be called a SF film, it's basically a pretentious art movie.

Review by Andres Salama from the Internet Movie Database.