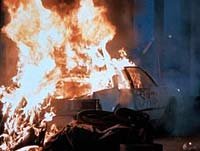 In the future the NBA has collapsed to be replaced by Future Sport - a new sport combining skateboarding and basketball. The world order has also changed and the North American Alliance is at war with the Hawaiian Liberation Organisation over territory. Future Sport star Tre Ramsey gets drawn into the conflict and offers the solution - a game of Future Sport where the winning country takes all. However with street rules applying and the HLO team being coached by the game's inventor Fixx the stakes are high.

This vaguely similar to Rollerball in it's view of sport in the future - even the game itself is quite similar. However that's where the comparisons end - with Rollerball the plot was quite intelligent, the sport being the way that the ruling forces show the masses the futility of individual action. Here the film starts with some comments about the spirit of the sport being lost since becoming big time and this should be taken as a comment on the NFL, NBA etc. However after this it stops being intelligent and goes into a plot where a sportsman can decide to stop war by declaring a game that both warring factions seem happy to accept. It really is so unlikely that it's hard to even dispel disbelief for 90 minutes....I mean Hawaii versus USA? I don't care how far in the future the film is set but that's never going to be believable.

The film itself is visually poor. Special effects look computer generated and don't fit in with the life action and the sport action is almost dull - with some shots of people getting hit used more than once. In rollerball the action was at least a little exciting, here we all now whose going to win and the director moves it all so fast that we don't get a chance to get into the drama of the game.

Cain shows that TV is the media he belongs in by giving a cocky performance that lacks charisma. He does try to be a bad guy who turns good but he's not convincing in either - in fairness he does get better towards the end as his character gets more sympathetic. Williams is OK but she's not leading material - in fact the film almost seems to be looking for reasons to keep her round (she interviews him, she is his ex, she gets info on the HLO, she gets kidnapped etc), but she is the most believable of the characters. Snipes is terrible - he clearly did this to get the Ex. Producer credit - he does an awful accent through out and seems to only turn up to say something profound or to save the day.