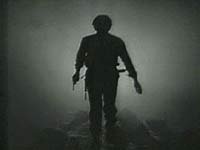 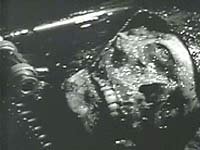 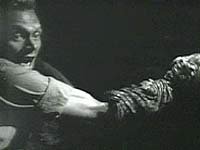 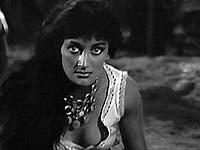 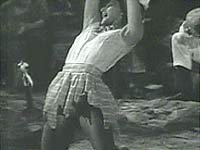 In early January, 1961, my older brother and I noticed an ad for CALTIKI in the Chicago Sun Times. A few weeks later, one of my brother's 6th-grade classmates actually saw the film, and reported something about "...a guy who goes down...and comes back up a skeleton." Sounded like something I had better avoid.

In Spring of 1963, my brother borrowed an off-brand monster magazine from a friend that included a big picture-story article on Caltiki, featuring all of the commonly available stills. Significantly, they did NOT show any of the FOUR BIG SHOCK SCENES--so I had no idea what I was in for when, on Saturday night, May 18th, 1963, a Chicago station showed CALTIKI for the 1st time on local TV. My brother and I sat in our den with the lights out, attentively following the film as it unfolded. Suffice to say, when it ended, I was grateful for the phony looking doll-house furniture and toy tanks used in the final scenes, since they helped alleviate the sense of SHOCK caused by the first 25 minutes of the film.

CALTIKI is an astoundingly dark, disturbing film experience....up until and including the first hospital scene. Mario Bava and the Italian horror culture of that era were masters of the ominous, morbid, and grotesque, possessing that unique ability to probe the depths of the truly horrific, stomach-turning---but subtle--- fear that lurks within us all. For a low-budget film, the first 25 minutes of CALTIKI are remarkably well designed and directed---and the script and acting are also generally above average.

Of the four big SHOCK scenes, the fate of the hapless Bob (the diver--played by Daniele Vargas) was undoubtedly the most traumatic for me. WOW-- what a stunner! Expertly staged and edited.....the terrifying underwater scenes (and extremely effective musical score) and the intense pacing as the wet-suit clad body is pulled out of the water...and the fact that the guy is still BREATHING when he is unmasked..really knocked me out on first viewing. It's an image that keeps on giving over the years, a moment that I never recovered from as the film progressed.

Then there's Max's gory, outrageous death scene--but by the time it came around, my 12-year old brain was fried. And how about the infamous and truly disgusting hospital scene, when the hunk of Caltiki is peeled off of Max's arm....GEEZ, guys...could you have thought of anything more sensational and sickening? But that's the peculiarly gory "sensibility" of the ItalianMexicanSpanish horror industry of the time. (However-- if you look closely, as the nurse walks toward the camera with the blob encased in glass, you clearly see Max's right arm stretched out on the table, looking perfectly normal).

The fourth SHOCK (for me, at least), which is rarely mentioned, is the sight of Ulmer's corpse...deeply disturbing, yet almost beautiful in its nightmarish way--a bizarre piece of cinematic high art that confirms our worst fears about Ulmer's fate, points to the upcoming plot developments, and explains Nieto's delirious rants about "the mummy...!"

Viewing CALTIKI again on this superb new DVD is quite an experience; the very generous commentaries perform a valuable service in documenting the BavaItalian cult-like appeal of the era, and Tim Lucas' expert observations are greatly appreciated--especially his explanations of the techniques used to create the opening jungle montage with glass-paintings, miniature set pieces, mattes, etc, which have always mystified me. I wish, though, that one or these expert commentators had something REALLY unique about the film to show us: behind-the-scenes production photos, an original script or storyboard, the National Geographic clippings that Lucas mentions were matted into the opening shot...ANYTHING that might still remain of the film. But there's nothing. We DO get a lot (and I mean a great deal) of chatter about the influence of the British Quatermass films on Caltiki...which gets a bit tiresome, especially in the absence of any of the above mentioned rarities which would have greatly enhanced the disc's special features.

My overall opinion of the film hasn't changed much in the 57 years since I first saw it: after the first 25 minutes--in which the sense of dread and ominous, suffocating terror slowly, methodically build and overpower the intrepid band of scientists---- the film really takes a nose-dive, becoming a rather drab, uninspired, routine sci-fi actionmelodrama. The only scenes which really maintain the creepy, lurid tone of the opening are the scenes in which Max (Gerard Herter) is onscreen. He's one fascinating and crazy guy to watch.

In any case, this new DVD rescues one of the great, low-budget cult horror films from obscurity. Who knows?-- maybe CALTIKI will now get a little more respect, thanks to this new, admirably documented release.

PS-- If you'd like to see and hear Gerard Herter's (who played the demented "Mad" Max in CALTIKI) real (German accented) voice, check out the episode "The Great Casino Caper" from TV's "It Takes a Thief" (posted on You Tube), and the scene at 21:55". Herter lived and worked in Italy, where this episode was shot (with Robert Wagner, Fred Astaire, and Ed Binns). Make sure you watch an ENGLISH-dialogue version, not the Italian dub that's also posted.

Review by lrrap from the Internet Movie Database.