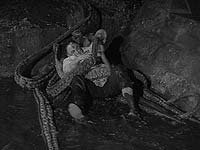 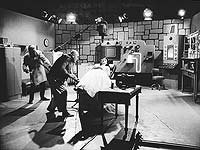 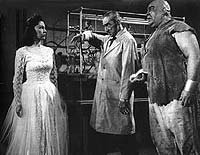 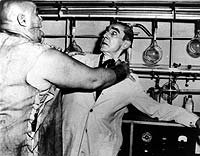 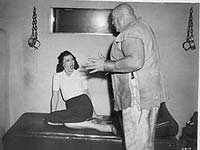 There has long been a good deal of debate within certain circles about the identity of the worst director ever. These days, the most common response would probably be Michal Bey. True, his movies suck, but they're still good enough to bring in millions for their studios. Others would point to German director Uwe Bol, whose series of video game adaptations has resulted in a petition calling for him to never direct again. Last I heard, this petition has over 10,000 signatures. I personally would choose the little known Coleman Francis, creator of such atrocities as The Beast of Yucca Flats and Night Train to Mundo Fine.

But one name that keeps popping up is that of Edward T Wood. Unlike most B movie directors, Wood wasn't in it just to get a paycheck and see his name in the credits. Wood was hardworking, earnest, and oh so eager to make a good movie. But the fact was, he lacked any formal training or innate skill. He has a reputation for making guys like Roger Corman and Bert I. Gordon look like Spielberg. I've known for some time now that I had to see (and most likely ridicule) his work, and I decided to start with his second film, Bride of the Monster.

Bride is truly remarkable in that it is made entirely of clichés. The mad scientist, the hulking, mute henchman, the hard nosed reporter and her boyfriend the cop, the mysterious character who may know more than he's telling, even the dark and stormy night; they're all here. The scientist (played by Bella Lugosi!) has created a process that can turn normal human beings into giants with 'the strength of twenty men'- if it doesn't kill them, which is what's happened to every test subject so far. With this process, he seeks to- all together now- conquer the world and gain vengeance on those who have wronged him.

Like all self respecting mad scientists, he has a monster to guard his lab, in this case an octopus. In most scenes, the octopus is brought to life through the magic of stock footage. But for scenes where the creature deals with the professor's unwanted guests, Wood used a mechanical octopus, reportedly stolen from the Republic Studios lot. But he forgot to steal the motor, so it's painfully obvious that the actors are just writhing around and moving the tentacles themselves. Fortunately for viewers, this spectacle is as funny as it is pathetic.

It's also worth noting that most of the people in this movie are idiots. For instance, the pair of hunters in the opening scene run from the mad scientist and his henchman even though both of them have guns. And the pretty young reporter thinks that it's a good idea for her to go investigate the old house in the middle of the swamp on her own. For that matter, why is she the first one to look into the house? By this point, twelve people have gone missing in the swamp, and rumors of a monster abound. Hasn't it occurred to the police that they might want to take a look at the only building in the swamp? I suppose if they had the pretty girl never would have found herself in peril, and then we wouldn't get the climactic final scene in which the police arrive to save her. Oops, I just gave away the ending! The bottom line is that nothing in this movie is done right. The actors convey no more emotion than if they had been reading from a teleprompter, their lines sound like they were written by an eight year old, production values are abysmal, and the entire plot is an exercise in predictability, which relies on people doing the dumbest thing possible in every situation.

But the whole thing has such an earnest, amateurish feel that it's still watchable. It's a bad movie, no doubt about that, but it does have an almost endearing campiness to it. This is the kind of movie that Mystery Science Theatre 3000 was made to showcase, and show it they did, in one of their best episodes.