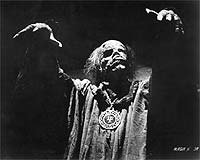 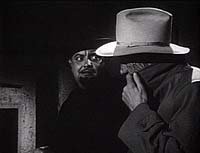 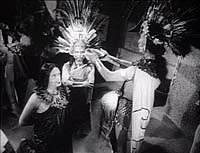 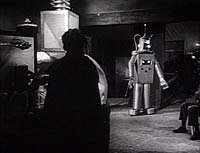 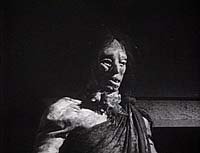 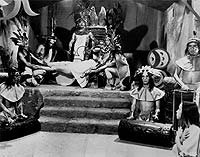 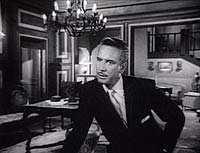 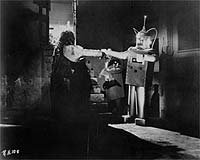 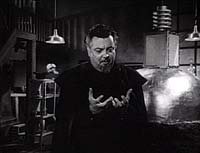 This was a lot more entertaining than I thought it would be. With so many plot elements in play, what's not to like? There's an ancient legend, complete with ritual sacrifice, a curse, and a lost treasure, a greedy 'doctor'gangster hoping to unearth the treasure, which is guarded by a mummy...and, an Aztec descendant hypnotized by the doctor to pilfer the treasure; with plan 'B' begating the robot, a Frankenstein monster of sorts, equipped with radioactive powers. The atmosphere is pretty good too; not only are there tunnels, a cryptmausoleum in a nasty graveyard, but a lab as well. The mansion, with the good guys huddling in 1930s British mystery fashion, provides the frame story.

I'm sure that my experience would've been diluted considerably had I seen the 'prequel' movies in this series. If the frame story had been the only original element, then my rating might've fallen as low as the snake pit. In any case, the experience was worth it. As others have pointed out, the indigenous Aztec theme helps quite a bit by establishing authenticity. We don't have to deal with a transplanted vampire legend. What was weird, though, was the mummy's aversion to the crucifix; there would had to have been an association with the Conquistadors for that to make sense. It does add up that the robot's radioactive power wouldn't work on the mummy. As a supernatural being, the mummy can't really be killed--he's already dead.

Some of the special effects were nicely done: the mummy's plenty creepy, the acid-deformation and even the snake pit aren't bad either. The lab seemed a decently 50s sci-fi jumble of doodads...but, what's this? a wood-burning stove with a nose cone on top? And the icing on this entire mythichorrorsci-ficrime mystery melodrama was that robot. Actually, there's two good things about it: it has potentially crazy power (as the graveyard keeper found out), and, true to the Frankenstein myth, there's a guy there, inside of it. Of course there is; but he's supposed to be there, a re-animated corpse with Cold-War era technology. But the robot is disastrously stupid-looking. Those of you comparing movies of this type to American serials of the 40s and 50s are spot-on.

Flash Gordon and his ilk did a bit better than this metallic-toned tinkertoy-box Bigfoot. Isn't that a radio-dial display on its chest? And a gas can for a helmet? Even if we can stand watching it tootle around, we nonetheless get short-changed--as it doesn't even appear until the movie's almost over. The robot is embarrassing. The only really campy part of the movie is worth it--the nice throw-down the mummy puts on the robot. And that denouement works; the girl gives the mummy back its treasure. All is well.

So, the staus quo is restored; the correct goal for a horror theme. With the major exception of the robot, Aztec Mummy v. Robot is a decent vintage cult movie. The acting wasn't bad, and despite the use of flashbacks, the pacing hummed along well enough. I'd recommend this for the creative use of so many ideas.