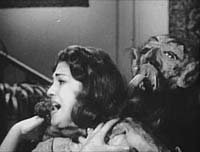 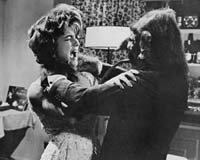 This is undoubtedly the best paced of the '60s cycle of horror films produced in Mexico, at least of those that I've seen. It should be remembered that filmmakers and Mexican audiences of the day are still under two influences which make their films run a bit slow for US audiences: the Roman Catholic Church, with its heavy emphasis on symbolism, and the serial adventure films produced in the late '30s-early '50s. This means that the films are filled with moments that are supposedly frightening, according to traditional Catholic symbolism, that don't shock US audiences in the least; so the typical Mexican film lingers on images of skeletons, which are presumed to be scary in and of themselves, since symbolically evocative of death. In the US, that notion came to a complete end by the Second World War.

The influence these films borrow from the old serial films is a little more difficult to point out - it has to do with the continuity of the narrative and the plot-twists used to move the narrative along. Basically, because the old serials were filmed and seen episodically - and quickly - the filmmakers would wrap-up a segment without much thought of where the story would go in the nest episode. Frequently they found themselves having to back-track and either explain away a story-thread they left dangling, or reintroduce it in a manner incongruous with its original appearance. So if in episode 1 the hero is said to have a cousin, and by episode 3 the cousin has mysteriously disappeared from the script, someone might mention that the hero was an orphan, and had no family; then in episode 6, if it suddenly became necessary for the hero to have a family, the "cousin" might be re-introduced as the hero's long lost brother.

For reasons unclear, this narrative carelessness became something of an aesthetic value in Mexico. These films seem to manifest a pride in their own incoherence. How does a 17th century aristocrat, burnt to ash, wind up floating around in a comet - and transformed into the monster of the title? Who knows. but this is just the beginning of the film's many confusions.

Since I only wanted to make a general comment here, I'll leave the reader to discover all the incongruities, great and small, that inform this bizarre little horror classic. But what must be pointed out is that these incongruities are not quite accidental; the filmmakers are simply trying to give their audiences of the time what they want - evil spirits, rubber monsters, hypnotism, suggested rape, gross out brain-sucking death scenes, burning people alive, attractive young women, and evil undead aristocrat, and "super science" - that is, black magic masquerading as modern technology. - It's all here.

Oh, and don't forget the comic relief, provided by a couple of policemen who find their appetites ruined by discussion about brainless corpses. (The two actors playing these cops are in fact the real professionals of the film, they actually perform quite well.) I'm giving this film 8 stars, but only because it is the best of its kind. If you have one '60s Mexican horror film to see, this should probably it, since it moves along at a (comparatively) lively pace.

Review by winner55 from the Internet Movie Database.