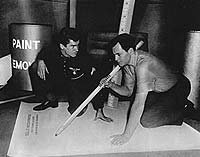 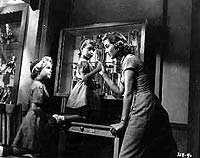 While not a classic, this is one of the better AIP sci-fi films of the 50s. John Hoyt does a great job playing the lonely doll maker shrinking real people that he likes to provide him company in an apparently lonely life. The sets and props(for AIP standards)were quite good. On the "fun facts" mentioned on the DVD case, they refer to the "War of the Colossal Beast" as the film Bob and Sally watched at the drive-in. While that film was co-billed with this one, the film that they were actually watching was "The Amazing Colossal Man" of which the co-bill to "Puppet People" was the sequel.

The"Midnite Movies" DVD edition of this film is excellent with a sharp image and great contrast. The film is presented in it's original aspect ratio (1:33).

Review by jckogel from the Internet Movie Database.