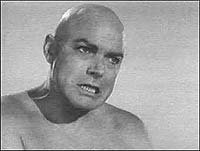 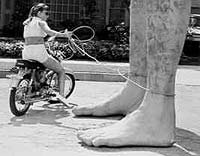 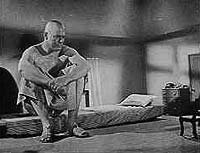 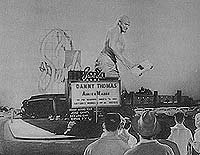 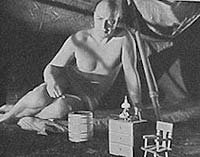 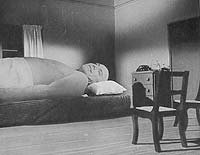 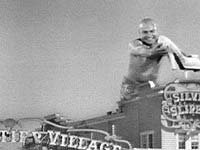 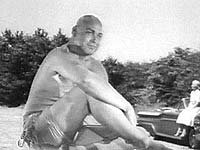 The Amazing Colossal Man starts late one night at Desert Rock in Nevada as the US military prepare to explode a new type of atomic bomb, a plutonium bomb which is the first of it's kind. The bomb is detonated but fails to explode, the men in the know claim it's a delayed chain reaction & it's only a matter of time before the plutonium bomb goes off. Then a small civilian plane crashes in the bomb testing area & Lt. Col. Glenn Manning (Glenn Langan) rushes to try & save any survivors but the plutonium detonates & Manning is caught in the explosion, Manning suffers 100% burns to his body & is rushed to hospital where he makes an amazing recovery. Mannings skin grow's back without so much as a scar but as an unexpected side-effect Manning starts to grow, within days he is 60 feet tall & the US military are at a loss at what to do. Manning starts to go crazy & manages to escape the US army base & heads straight for Las Vegas...

Co-written, produced & directed by Bert I. Gordon who is known as Mr. BIG which is very apt considering his films deal with themes of size this was probably rushed into production & made because of the then recent success of The Incredible Shrinking Man (1957) while Attack of the 50 Foot Woman (1958) came soon after as well, not exactly considered a classic The Amazing Colossal Man does have it's fans & has been released various times throughout the years I thought it was a decent enough way to pass 80 odd minutes as long as you don't expect too much although I can't say it stands up that well when seen today. The script tires to turn Manning into some tragic figure, it tires to embed him with sympathy but he just comes across as bitter, ungrateful & unlikable. Some of the scientific nonsense that is paraded about here wouldn't convince a five year old, the speech about the human heart being a single cell will not fool anyone & it's amazing it was ever included as it never really goes anywhere other than have Manning cough a few times. The scenes at the end with the giant syringe are priceless, to inject Manning with some sort of cure they actually make a huge syringe complete with dosage markers, a giant plunger & finger rings for fingers (whose, I'm not sure) to go through! Then Manning just stands there & lets them inject him rather than move, it's all rather static & one dimensional. Even the the climax as Manning walks through Las Vegas leaves a bit to be desired, a worried crowd of about a whole ten people stand & watch as Manning just sort of walks along & not much else. All I'm saying is after sitting through 70 minutes of fairly dull talk there's not much reward, The Amazing Colossal Man is terrible but it's not that good & has dated badly with some really questionable science.

The special effects are adequate but hardly special, all the scenes with Manning as the giant have really noticeable matte lines not that Mr BIG had much ambition with the set-pieces anyway. The giant syringe is just really funny to as well, they way that soldier holds it & the fact it's a huge perfect replica of normal sized one. As expected stock footage is used although not extensively while the model plane looks iffy at best. Originally released on a double-bill with the British horror film Cat Girl (1957).

Filmed in Nevada in Las Vegas & the Hoover Dam stages the weak climax, almost certainly shot on a low budget the production values are reasonable for the period. The acting isn't great, Cathy Downs as the worried fiancé is terrible while Langan looks exactly like Arnold Vosloo as Imhotep from The Mummy (1999).

The Amazing Colossal Man really isn't that amazing at all, in fact apart from an unintentionally hilarious giant syringe it's pretty bland stuff with some extremely bad science thrown into the mix to no great effect. Worth watching for some innocent fun but I don't think it deserves to be called anything like a classic. Followed by the sequel War of the Colossal Beast (1958).