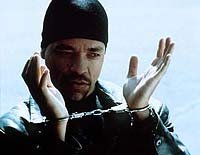 Ice-T stars as a federal prisoner that is doing a deed for the FBI, where a scientist is kidnapped by an extremist group, with Mario Van Peebles as the leader. An asteroid threatens the earth (a la Armageddon), and the top scientist is kidnapped, and hope lies with both Ice-T and Suzy Amis (Titanic) as an FBI agent.

Ice-T might be portraying another stereotypical role as a convict, as well as the villain, like his previous films, but his vulgar overtones might sound like one of his rap songs. Check out a cameo by Coolio as a street hustler, and this film marks the third appearance of Tiny Lister (Trespass, Jackie Brown) with Ice-T.

The scene where Amis cuffs Ice-T to the steering wheel of the car has been repeated several times, in films like Rush Hour. 48 HRS. was the first film to feature such a scene, and every fan of the film might view this scene as homage to a timeless classic.

Why Mario Van Peebles as the black David Koresh? Ice-T might have lynched his ass in this film, since the two first met in New Jack City.

Review by DON SERIBUTRA from the Internet Movie Database.