TV Spot - It Was Beauty That Killed The Beast
0:32 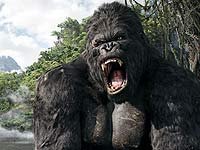 "King Kong" certainly does have it's moments of greatness. What else was to expect from the director who before dazzled the world with his Lord of the Rings trilogy. Most of the emotions work out well in the movie but are perhaps not as powerful as they truly could had been. This is because the movie suffers from some flawed storytelling and a flawed story in general. The editing and pace is lacking at times, which does make the movie a bit tiresome to watch at moments. 3 hours+ is of course a long sit and although the movie is spectacular to watch throughout it's entire running time, it's the way of storytelling, editing and a series of unlikely events in the movie that made me loose interest at times and prevented me from really feeling for any of the characters or caring really about the emotions.

The movie begins promising but after that it drags for the about next 45 minutes. Seriously did the movie really have to spend so much time on character introductions and were all those sequences aboard the Venture really necessary? The movie can be divided into three pieces; 1. Character introductions and the sequences aboard the Venture. 2. Skull Island sequences. 3. Back in New York. All those 3 pieces really feel like separate pieces and the movie doesn't feel as a whole. Also at certain points when characters get divided, or split-up, the story doesn't feel as a whole and every characters seems to play a role in their own personal movie, that were all thrown together again in the editing room to make one movie out of. It makes the way the story is told feel absolutely weak and flawed at certain moments.

Jackson obviously had more eye for the visuals and Kong than for the human characters and storytelling.

But yes, the visuals of the movie are splendid. Even though the movie didn't really gave me a typical '30's feeling, I still admire the way the re-created the New York of the '30's. Also Skull Island looks fantastic and has some nice settings. And of course Kong himself also really surpassed me expectations to be honest. He looked good and he is perfectly portrayed by Andy Serkis, who gives the character a more realistic feeling.

But that brings me to another problem I had with the movie; The movie tries to impress too hard. They try to top themselves in basically every sequences when it comes to the special effects. You see a dinosaur? Let's bring in an even bigger one! You see an insect? Let's bring in a faster one with more legs and jaws. It makes all of the spectacular action sequences on Skull Island feel very unrealistic and the story becomes too artificial. It's OK to impress the viewer with some revolutionary special effects but not when the story and storytelling suffer from it. I'm not a that big fan of special effects driven movies anyway (might sound strange, that coming from a Star Wars fan.) because of the simple reason that computer effects still look like computer effects, no matter how good they are made. This particular movie overused it's effects, in the never ending effort to impress the viewers and leave them in awe.

The actors in the movie are good. The sequences between Kong and Ann Darrow work out surprising good and powerful at times, which is of course also thanks to Naomi Watts, who was really good in her role. Jack Black is a revelation in a more serious role and he shows that he can also really do some good drama. Adrien Brody is of course also a great actor but I still don't really understand why an Oscar winning actor plays a role like this. It's a role without too much importance and flair. I can certainly imaging the movie without his character. Other fine actors in the movie are Thomas Kretschmann, Jamie Bell, Colin Hanks and Andy Serkis also plays an entertaining, enjoyable role as Lumpy the cook. All of the characters however are given very little screen time in the second and third act of the movie, with the exception of Ann Darrow of course. The movie truly mainly focuses on Kong and Ann Darrow. It does provide the movie with some good, powerful and emotional moments but at the same time it also provides the movie with many missed opportunities. The slowly turning evil transition of the Jack Black character for instance and how Preston (Colin Hanks) at certain points later in the movie forms his only link to the realistic normal world, instead of the money and fame driven world Carl Denham imagines himself in. The movie could had been so much more powerful and certainly more realistic if they had only spend more time on the script and gave the other characters also some more screen time, instead of just mainly only focusing on Ann and Kong.

Of course it's a summer blockbuster and of course the story comes secondary. However in this particular case I really feel that the movie suffers from it's flawed story and storytelling. It's so obvious that the story is just almost totally empty and the movie is nothing more than one spectacular but yet unlikely event after the other. The movie forgets about its story at times and try too hard to impress the viewers with its special effects and other visuals. It makes the movie too artificial and forced to watch at times.

The movie still remains almost perfectly entertaining to watch, just because so much spectacular happens. Some of the action is impressive and unforgettable but really the movie deserved a better story and character treatment. If that was the case, I almost surely would had regarded "King Kong" as one of the best movies of 2005.