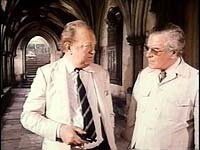 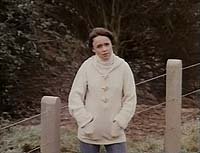 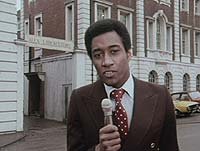 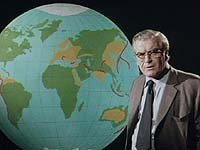 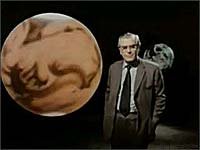 I saw 'Alternative 3' when it was originally transmitted on 20 June 1977. It was indeed intended originally for transmission on All Fools' Day: however, the reason for the delay was a labour dispute. (Wot, in Britain? Impossible!) This notorious hoax film has been banned from repeat transmissions in Britain ever since, thus unintentionally adding fuel to the cover-up theories. It's now (as I write this) resurfacing at long last, in a DVD edition, just in time for the annual spaghetti harvest.

Tim Brinton had been a genuine news-reader with Auntie Beeb for more than 20 years, so his presence in this hoax film lent it an air of authenticity. All the other 'real' people interviewed in this alleged documentary are in fact actors speaking scripted lines (some of them with dodgy Yank accents); the end credits include a conventional cast list (i.e., conventional for a FICTION film), which ought to have tipped the wink to viewers. Evidently it didn't.

Basically, presenter Brinton reveals 'evidence' that the space race and the cold war between the Yanks and the Soviets are both fake: the two super-powers have been secretly co-operating to build a colony on Mars. The alleged Apollo moon landings were, in fact, camouflage to cover-up what NASA are really doing on the moon: building a launch platform for the trips to Mars.

It seems that the people in charge of the United States and the Soviet Union are aware that the Earth is about to choke on its own pollution (I can certainly believe THAT part), and -- rather than attempt to clean up their own mess -- the people in charge have plumped for a third (sic) alternative: namely, they're going to up sticks and move to Mars with a selected population of the elite, leaving the rest of us behind. After all these years, I can't recall if there was a SECOND alternative offered by Brinton; I think that the people who wrote this thing just felt that 'Alternative 3' sounded more dramatic than 'Alternative 2'.

Some authentic footage is put to cheeky misuse: the view from a helicopter landing in a Terran desert shows up here as the view from a Mars lander approaching the Red Planet. All of the 'interview' footage is faked, as is some other footage: a shot of some subterranean Martian life-form burrowing through the Martian soil is actually the director's forearm buried in sand. The new DVD is chock-full of extras, rumbling the fakery.

As might be expected, a lot of viewers were taken in by this. Comparisons to the Orson Welles radio broadcast are inevitable. By the way: I've always felt that Welles's broadcast received a bad rap. Supposedly, Welles's Martian invasion caused a nationwide panic. I believe that, in fact, only a small number of people panicked... but they were spread across the entire United States, thus constituting a 'nationwide' panic. In the case of 'Alternate 3', after the hoax was confessed, a lot of believers refused to accept that they'd been hoaxed... and they downplayed the confession as proof of a cover-up.

Since this film has been unavailable (in Britain, at least) for so long, people's memories of it have become unreliable. Several people who viewed the same broadcast that I saw have described to me in detail the realistic UFOs which they remember seeing in this programme: too real to be faked, they assert. Except that, in fact, there aren't any UFOs on offer in this film, genuine or otherwise.

Bearing in mind that this film is faked, it definitely succeeded in what it set out to accomplish... and I'll rate 'Alternative 3' a full 10 out of 10.