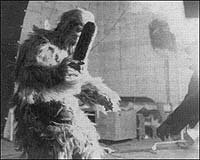 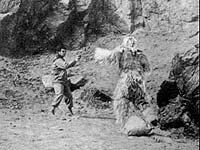 When I found out that the next movie on my groups list was a film directed by Jerry ("Wild Wild World Of Batwoman") Warren, I was resigned to the prospect of consuming the cinema equivalent of a sht sandwich. My consolation: "Batwoman" was one of those bad films that is SO bad that it's perversely fun to watch...so I was hoping for the same kind of entertainment value from "Man Beast".

To my surprise, "Man Beast" was halfway decent. It wasn't a good film by any means: The leading lady and her first suitor are as wooden and clunky as you'd expect.The logic of the screen play falls apart in several places. Some of the dialog is pretty risible. And the cast spends most of its time in the "Himalayas" wearing clothing more suited to a walk in the woods in autumn. But still, there were moments in this film where I didn't want to wash my face with broken glass to distract myself from the proceedings.

A couple things save this film from the usual dismal fate of JW productions: for once, his use of stock footage is reasonably well integrated with the rest of the stuff he actually shot himself. There's some decent bits of stage business and a couple of good "reveals" that pump some energy into some scenes. A couple of his actors are decent - the dashing he man guide who eventually usurps the girl's affections can deliver his lines, the actor who plays the professor manages a low key, believable performance. And "Varga" is an interesting character - both his makeup and costume "design" and the motivations of his character (and the revelation of his big secret) add some chewiness to the movie.

But in the end, it's still a Jerry Warren film....Jerry Warren, a director who insists on undoing any good impression he might have made in the first part of the movie with a "Yeti attack" scene that is disconnected and impossible to follow, and who ends the movie with a 'huh?' moment (the surviving couple escape when Varga, a character who is part Yeti and who has lived in the mountains all his life, proves incompetent at pounding in a crampon and falls to his death as he tries to rappel after them.) I wouldn't seek this one out, but if you are trapped into watching it, at least you won't need to gnaw your leg off to escape.