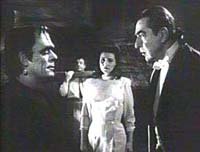 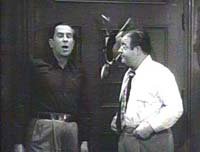 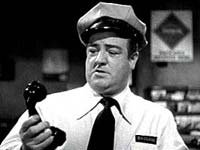 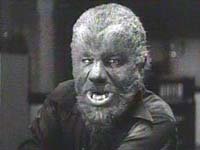 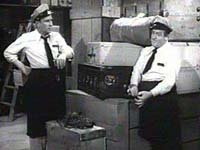 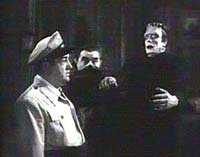 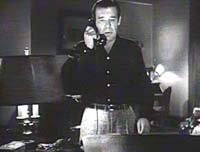 It is with some melancholy that I saw this film recently, as it was the final appearance from the classic Universal monsters. But after the mediocrity of "House of Frankenstein" and "House of Dracula" this film sends them all out with a bang. After seventeen years of Dracula, Frankenstein and Wolf Man films, Universal brought them back to save the careers of Bud and Lou, who were on a slow ride downhill. The plot is no more ridiculous than the previous two films in the series, and the music, effects, production design and performances are actually a bit superior. The film was a surprise hit and although the monsters never returned, Bud and Lou went on to meet the Mummy, The Invisible Man, several ghosts, and ended up as aged men Lost in Alaska. It's great to see Bela back as Dracula, and he is in fine form reprising the role that made him famous. Cowboy actor Glen Strange played the monster for the third and final time, and Lon Chaney Jr., the only actor ever to play Larry Talbot, is terrific as the haunted, guilt-ridden Wolf Man.

How the monsters survived what happened to them in "House of Dracula" is never mentioned, but Drac is back with the monster in tow and Talbot on his tail. Dracula heads to Florida so that he can revive the Frankenstein monster (why he wants to do this is never made clear) and good old Talbot wants to stop him. Talbot seems to have given up on his hope of finding a cure for his lycanthropy, but he is hell bent on stopping Drac and Frank from their fiendish plans. Unfortunately for him, Bud and Lou get in the way. The supporting cast is strong, with Jane Randolph and Ingrid Bergman lookalike Lenore Aubert playing the opposing human forces of good and evil. Randolph is an undercover insurance agent looking into the mysterious disappearance of two "exhibits" from MacDougal's House of Horrors. Aubert plays a mysterious European sexpot doctor who is seducing Lou so that Dracula can put his brain into the skull of the monster. Oddly enough, this crackpot exposition takes up little screen time and we have a fine grande finale in a magnificent castle where the three monsters all meet their doom. I especially love that the Wolf Man commits suicide by leaping from the castle into the sea, and he takes Dracula down with him. Chaney plays the part as sincerely as he always did, which was probably not easy for him since he had many scenes in the film with Bud and Lou. In effect he teams up with them, but he never loses his sincerity nor his haunted look.

Lugosi had seventeen years of film acting experience between the original Dracula and this movie, and he plays the part much more naturally. But he is still Dracula, and those hands and eyes are perhaps even more effective in this film than in the original.

I always liked Strange's portrayal of the monster. All of Karloff's pathos was long gone by the time this film came out, but Strange gives the monster one damn creepy lumbering walk. Also, Bud Westmore had taken over Universal's makeup department by this time, so the haunting, Jack Pierce design was well on its way into becoming the face of Herman Munster. Even so, he looks grotesque and scary.

Bud and Lou are far funnier in this film than in most of their movies. They have a hysterical routine about "the two girls last week" that goes by in a matter of seconds. And I swear after several rewinds that at one point Bud threatens to beat Lou's "anus off." Look at it yourself and tell me if I'm crazy.

Frank Skinner's music is truly fantastic. He creates unique and effective themes for all three of the monsters and a dopey leitmotif for Lou. And look closely at the scene in which the monster hurls Aubert from a laboratory window: that's Lon Chaney Jr. doing the hurling. Glen Strange injured his foot and was unable to do the scene, and Chaney, who had played the part of the monster before, donned the makeup, hoisted Aubert's stunt double and pitched her out the window. A true trooper. My only regret was that Universal had their classic monsters survive fires, explosions, drowning, staking, freezing, sulphur pits, quicksand and the passage of centuries only to be finally conquered by Abbott and Costello.

Review by roark-12 from the Internet Movie Database.

The ''Making of'' Abbott and Costello meet Frankenstein
33:19